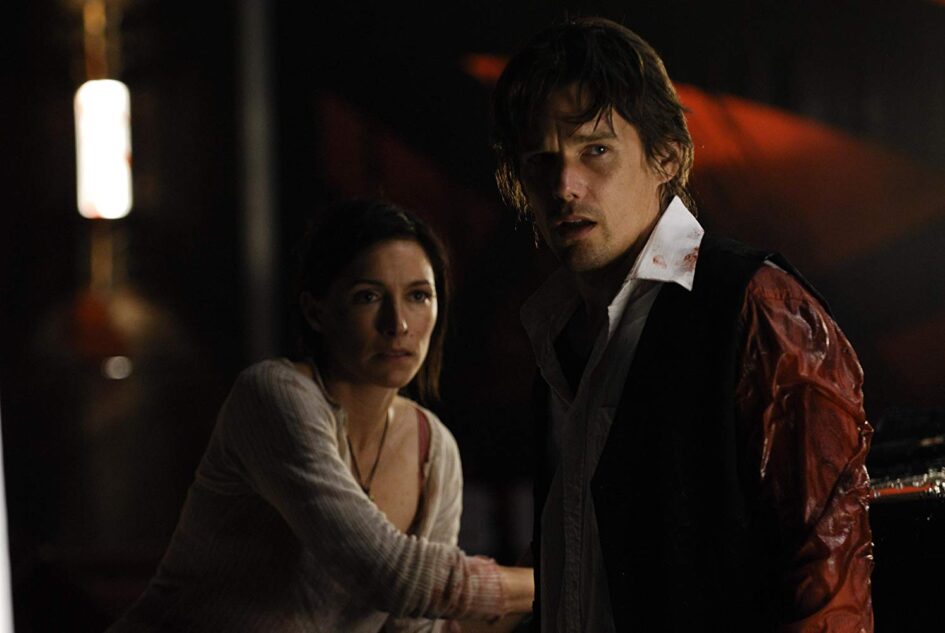 A worldwide plague turns humans into vampires. A lack of blood supply threatens survival. And humanity’s last hope may be an immortal hematologist who refuses to feast on humans. Daybreakers is My Guilty Pleasure.

I’ll admit I’m a sucker for an old-fashioned vampire flick (as long as there’s no glitter involved). Dracula‘s great an all, but 30 Days of Night is probably my all-time favorite. (Editor’s Note: If you haven’t caught Taika Waititi‘s big-screen unholy satire of What We Do in the Shadows, as well as his superb small-screen adaptation, you’ve got time to catch up before Season 2.) There’s just something about the clear line between good vs. evil that tends to boldly manifest itself within the sci-fi horror subgenre that I absolutely crave. I’m always wanting more.

Daybreakers does a decent job at blurring that line, as a vampire seeks a cure to turn these monsters back into full-fledged humans. Although the contemporary creature effects were created by Weta Workshop, they’re minimalistic, making this one feel like a B-movie with more than a few big-named stars. I’ll admit I was under the influence of cold and flu medications while watching this one, but I enjoyed what I did see.

And the reason for that is Ethan Hawke. The actor can seemingly do no wrong in my eyes. As the undead blood doctor who fights for humanity, his role involved moral complexity and as an actor, he was pretty believable. Hawke has starred in more than a few of my favorite genre movies, including Dead Poets Society, Gattaca, Training Day, Sinister, The Purge, The Magnificent Seven, Valerian and the City of a Thousand Planets and a quick, cheesy and terrific cameo in Blumhouse’s small-screen Purge.

You might notice that the majority of those films were underrated and underperformed at the box office, but Hawke’s performances were always top notch. I would love for the actor to experiment with more micro- and mid-budget movies and to take more risks with his roles, despite their genres, as those are the ones that seem to do the best at movie theaters.

Usually, Hawke’s acting has been underappreciated, so it’s exciting for me that he’s actually received nominations for four Academy Awards and a Tony Award. He’s finally gained recognition. And now the actor has added writing and directing feature films and Off-Broadway plays to his repertoire, so he’s now a triple-threat multi-hyphenate.

It looks like Hawke will appear in a few upcoming films to be released later this year, including Tesla, Tonight at Noon and Cut Throat City. I really don’t know anything about them, but they’ve gotten my attention and they’re now on my radar. I look forward to seeing them.

I really do enjoy watching genre pictures featuring Ethan Hawke, including Daybreakers, and I would recommend checking out each one that I previously mentioned, if you haven’t already seen them. Hawke really does bring a lot to a production and he will most likely make multiple appearances in future My Guilty Pleasure columns.