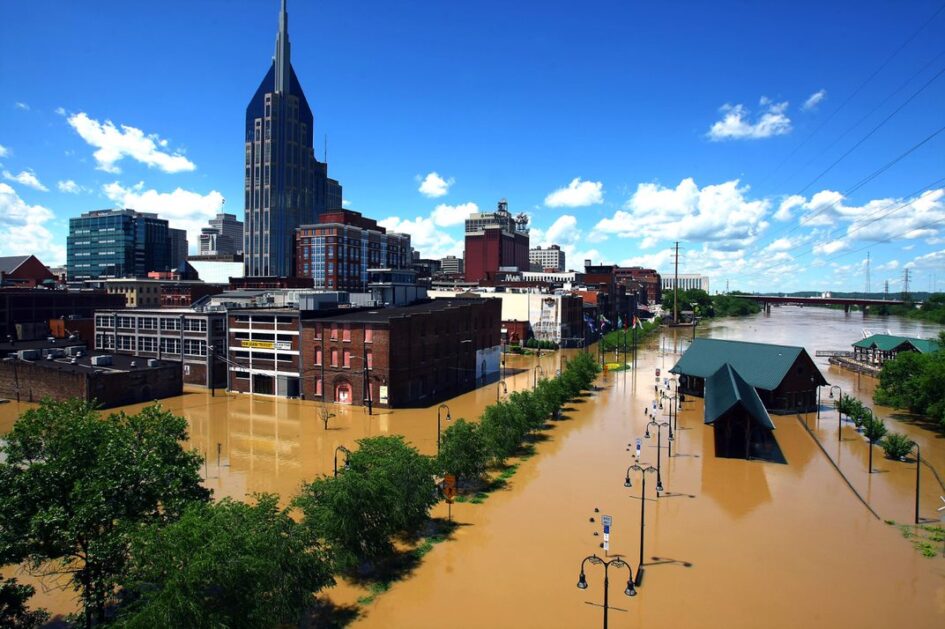 The Cumberland River overflowed its banks in 2010, causing floodwaters to rise around the riverfront area and several blocks of downtown Nashville, May 3, 2010. Courtesy of The Tennessean. Photo Credit: Larry McCormack.

Per Matt
When the rain came, Nashville was never the same. Currently appearing at the Frist Art Museum through May 17, The Nashville Flood: Ten Years Later recalls the Great Flood of 2010, which, for the most part, went underreported nationwide.

This free exhibit in the Conte Community Arts Gallery brings the natural disaster back to life. The story is retold via powerful photographs, oral histories and an interactive video experience showing a Then and Now comparison all provided by The Tennessean newspaper and the Nashville Public Library’s flood archive. Also on display are damaged items affected by the rising water of the Cumberland River, which crested almost 12 feet above flood stage in May 2010, along with multiple smaller waterways within the area.

Frist Art Museum curator Katie Delmez reflects on the events. “We thought that an exhibition to mark the anniversary was appropriate. We also liked the idea of going beyond what you read in the local headlines. Everyone heard about downtown, Bellevue and Opry Mills, but because the waterways go through all of the city, we wanted to take a broader look and to focus on 10 neighborhoods.”

The areas of downtown Nashville, East Nashville, Donelson, Woodbine, Antioch, Green Hills/Melrose, Belle Meade, The Nations, Bellevue and Bordeaux are all revisited. Neighbors helping neighbors are shown, as “The Redneck Armada” used personal boats for rescuing stranded residents. Unfortunately, 26 people in the region died during the event and the destruction was massive, amounting to billions of dollars in damages. Comparisons can be made to Hurricane Katrina’s devastation in New Orleans, although by the time of the Great Flood, federal relief efforts had already improved.

One of the most powerful pictures includes a volunteer rescuing a pet dog, which affected me greatly. During major storms, the fight-or-flight instinct is present in animals, just as it is for humans, and many times owners and their pets are permanently separated in the aftermath. According to a conversation Katie had with former Nashville Mayor Karl Dean, Lipscomb University took in many misplaced pets, along with assisting in animal rescue. “Everyone did their part,” when referring to helping stranded animals in need, she said.

Music City is represented by Soundcheck’s devastation. As a rehearsal and storage space for musical instruments, many top musicians lost their equipment. The music community united to help Nashville and local residents to get back onto their feet through a benefit concert and Garth Brooks held a series of nine concerts, with all of the $4 million in proceeds going toward rebuilding the area. The music never stopped for The Grand Ole Opry and the CMA fest, as Nashville was still open for business, despite the disaster.

By the time the waters receded, Middle Tennessee was never the same. And because of this, many people who survived the flood have yet to tell their stories. Thus, a visitor response area was created for people to leave hand-written notes to tell their tales. Anyone can share their stories online by using the #NashFlood tag to reflect on what happened. During my time visiting the exhibit, I read a few emotional stories that were posted.

On Sunday, May 3rd, former Nashville Mayor Karl Dean will be moderating a panel discussion, along with Andrea Blackman, who runs the special collections division of the Nashville Public Library, representing the voice of the everyday person, as the two reflect on the historic event and discuss how the city came together in order to rebuild the city. Beginning at 1:30 PM, the panel is free, on a first come, first seated basis.

For more information on the exhibit, please visit the Frist Art Museum webpage.