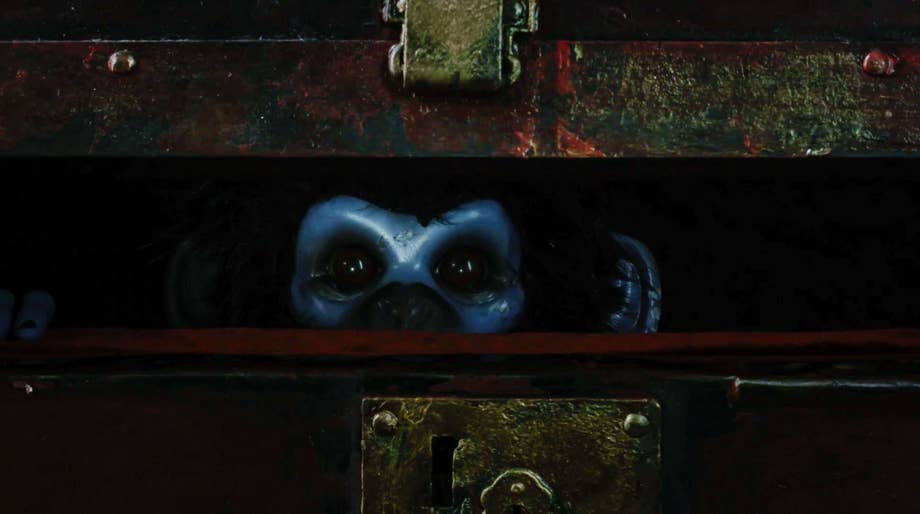 Per Matt
It’s been a while since I’ve visited My Guilty Pleasure. With the holidays in full effect, family was over for Thanksgiving and all of the aftermath that ensued. Now, it’s on to Christmas, rinse and repeat. As a giving person, I’m offering you a holiday treat: Toys of Terror!

When a young family purchases a vacant property without doing much research on it, as visions of flipping it and getting rich dancing in their heads, they soon realize this very large fixer-upper holds some dark secrets. Previously known as the St. Germaine Children’s Clinic, this house isn’t haunted, necessarily, but it does terrorize its inhabitants, which is why it’s been abandoned all these years. Inside the building, a very large trunk stored a lot of older toys. Slowly but surely, each one of these toys comes to life, speaking to the kids and eventually attacking the parents. All of this is centered around Christmas. Talk about a bloody holiday.

Wandering spirits appear and then inhabit these toys and the animation isn’t bad, but it isn’t the greatest, either. I was most interested in a classic video game console that played only two games on screen. Barnstormer was the first, which felt very familiar to the classic Atari 2600 game, but it was Survive or Don’t that offered the most storyline plot devices… and then it was almost immediately forgotten. In this game, a character, who looked eerily like one from the film, faced some deadly dangers before it was game over, man. And then that person, outside the video game, faced a similar scenario. Was this some sort of cursed console or was it merely a freaky plot device? I really wanted to see more of it and get some answers.

So many questions are raised by its open-ended conclusion, perhaps they will be addressed in a sequel sometime soon. As cheesy as it was, Toys of Terror is still better than the recent Child’s Play reboot.

Toys of Terror was brought to life by Syfy and The Cartel, which you may recognize from previous films like Deadly Sugar Daddy, Deadly Daughter Switch, Who Wants Me Dead? and the soon-to-be released, A Deadly Bridenapping. Seems like an ongoing theme, but they also produced a handful of Creepshow episodes, so there’s that. I wouldn’t say The Cartel is exactly on par with low-budget horror masters of mayhem, The Asylum, but give the studio a few more years to break free from the chains of those Lifetime Movies of the Week and there could be some major competition between the two companies.

I’m actually really curious to get the ratings for this holiday horror. With no Sharknado-sized pop-culture release this year, Syfy has really upped their game, in terms of promoting this release, along with Letters to Satan Klaus, which premieres on Saturday at 9 p.m. ET/PT. I don’t seem to catch too many tales of terror centered on holidays, so all I can do is watch them when I find them, all the while encouraging others to give them a chance, as well. Happy holidays, everyone.