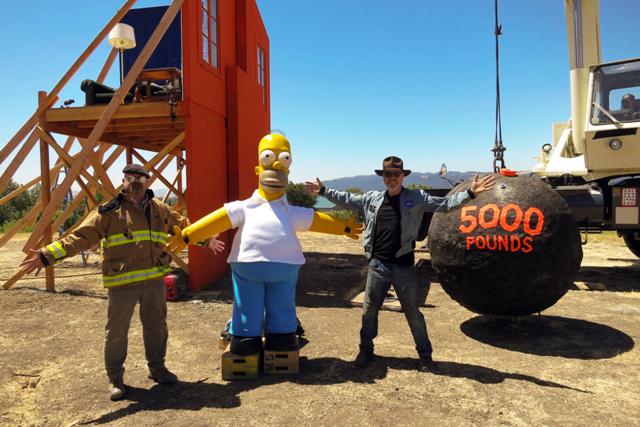 Now in its 13th season, Mythbusters has focused on more pop-cultural science experiments, recreating the on-screen situations of Indiana Jones, The Transformers, The A-Team and The Simpsons!

In the Mythbusters Simpsons Special, Jamie Hyneman and Adam Savage invited Executive Producer and Showrunner of The Simpsons, Al Jean, onto their show to recreate two cartoon-physics situations in the real world. The TV-based experiments included the time when Bart drops a lit cherry bomb down a toilet, transforming the bathroom into geysers of water (The Crepes of Wrath), as well as the time when Homer used his body to stop a wrecking ball from destroying his family’s home (Sideshow Bob Roberts).

Experiment #1 involved recreating working toilets and a plumbing system to be destroyed by an explosion. Sadly, they didn’t use real fireworks… something to do with them being illegal (never stopped me when I was a kid!). Each of their experiments proved successful on their smaller-scaled models, so they created life-sized models.

Once the larger models were functional, the first test proved successful, but but also ripped the toilets out of the floor. In their second test, the guys bolted the toilets onto their own plumbing and once again, they destroyed the toilets. Myth: Busted.

In Experiment #2, Jamie built a real-life recreation of Homer Simpson. Building the character out of sheet foam (the same technique used for creating all the Muppets), Al Jean provided Homer’s measurements that are used by the animators on the show.

Hyneman constructed an extra-large wrecking ball and two houses for demolition. Twelve feet was the maximum distance used in these tests before the crane would tip over (which is far less than in the cartoon). Without a body, the control house was substantially damaged. Homer did, in fact, make a big difference. When attached to the wrecking ball, his body prevented major damage by the building. Jamie added, “This cartoon doesn’t get enough credit for proper engineering.” Myth: Plausible.

This newly slimmed TV show feels a lot different now that all the junior Mythbusters aren’t running around. Without The Build Team on hand to assist with experiments, the show feels more straightforward with less filler material… but it also adds more goofy jokes by Hyneman and Savage.

Strength: Pop-culture science, courtesy of The Simpsons and Mythbusters!
Weakness: Lots of potty humor.
WTF Moment: Science actually supports a storyline from The Simpsons! Who knew I was learning, while laughing?

Notable Quotes:
– “Now that’s a big-ass ball.”
– “Homer’s ass is quite impressive.”
– “This is what we call a shop shower.”
– “That’s a big, fat dump… of pressure.”
– “No force can contain the cherry bomb.”
– “Jamie brushes his balls every morning.”
– “Does it look like his ass is dead center?”
– “This is working exactly like I had in mind.”
– “With that, this Simpsons special game of thrones is ready for blast off.”