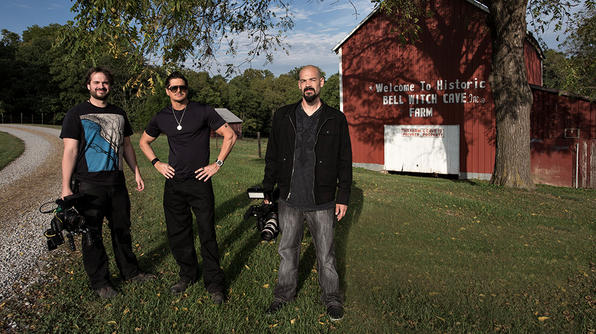 For more than 200 years, the Adams, Tennessee property that contains the Bell Witch Cave, as well as the surrounding farm, has been shrouded in a supernatural mystery.

As the legend goes, from 1817 to 1820, John Bell and his family was haunted by an unknown force that taunted, tormented and eventually killed the patriarch of the Bell family. To this day, the property has been haunted by the Bell Witch, most notably appearing in the Bell Witch Cave.

For some unknown reason, within the past year, Ghost Adventures was granted full access, becoming the first paranormal TV show to investigate the property. For years, the property owners would not allow any media access onto the property, whatsoever. That seemed odd to us, especially since we attempted to reach out to interview the current owners and promote their tourism business, one which they can only profit by having more publicity. Regardless of their actions, we’re glad the property is generating additional headlines.

Growing up in Tennessee, I knew the Bell Witch legend well, although I have never visited the property. I’ve read many non-fiction books and articles documenting the Bell family’s struggles with supernatural forces and can safely say I’m intrigued by one of the oldest and most-documented ghost stories in supernatural history.

Ghost Adventures did a decent job documenting and interviewing descendants of past events, although the program only accepted ancient, disturbed Indian burial mounds as the reason behind the Bell Witch. For some reason, they never even mentioned John Bell’s disgruntled neighbor who placed a curse upon him after selling her land to him. Maybe she could trace Native Americans into her family tree, but it is widely believed her voice was that of the Bell Witch.

It was interesting to see the crew investigate the vacant (and cursed) house of Drewry Bell, who supposedly incited evil spirits after digging up a portion of the burial mound. Their uneasiness was believable. When the property owners revealed past tourists removed rocks from the cave and subsequently, they had unusual turns of bad luck (possibly being cursed) until they returned the rocks, I knew the the ghost hunters would get some pretty good evidence. I was surprised the Ghost Adventures Crew didn’t attempt to upset the spirits — like they normally do in every other investigation — and was actually impressed with their investigative techniques, including their results.

A while back, I remember reading an interview my brother had with the two directors of The Blair Witch Project, who based their movie, in part, on the Bell Witch legend. So, it was funny to hear someone in the GAC state, “This is real Blair-Witch stuff, right here.”

Now, more than ever, my curiosity is piqued and I need to visit the property, hoping to reveal a portion of its 200-year-old mystery!