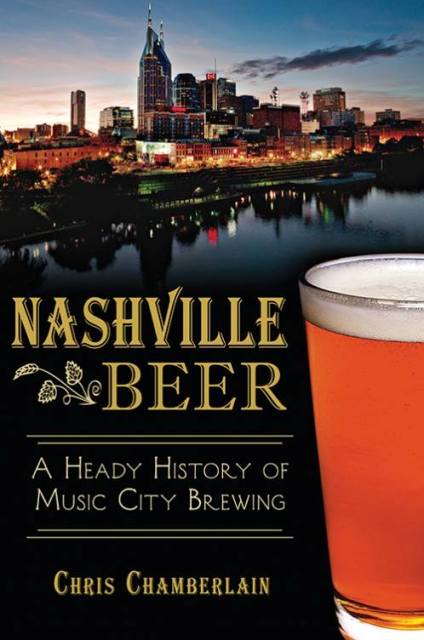 Middle Tennessee has had a turbulent history of brewing craft beer. Before Prohibition, it was once a thriving industry, then there were many dark years without any local breweries, whatsoever. Nashville Beer: A Heady History of Music City Brewing, explores the different eras of craft beer that helped brew a culture and build a thriving city.

Food, Drink and Travel Writer Chris Chamberlain begins the book by examining the area’s brewing history during the 19th century.

Once Nashville was designated as the state capital, many German immigrants moved there, bringing with them different brewing styles. Craft beer was produced locally, but some Midwestern beer was shipped and distributed to the area, as well. During that time, there were multiple breweries within the area, including Nashville Brewery, Spring Water Brewery, Rock City Brewery and Nashville Union Brewery, to name a few. Although the downtown Nashville brewery changed names many times over within it’s first 30 years of production, it was most successful when it was known as The William Gerst Brewing Company.

William H. Gerst was a pioneer in the brewing industry and was also known as the king of advertising. He promoted a variety of his beers at the Tennessee State Fair and Centennial Exposition, gained lots of attention for creating cone-top cans and labeled it as “Brewed in Dixie,” before Prohibition practically shut down the brewery. Gerst lost his desire to brew malt beverages, near beers and other non-alcoholic drinks (Cola-Pepsin, Imperial Ginger Ale, sodas) during Prohibition, paving the way for his four sons to take over the brewery.

Once Prohibition ended and Gerst beer was back to being brewed once more; eventually, Pabst, Miller and Anheuser-Bush overcrowded the market, squeezing out the little guys. The brewery was sold to different investors and eventually, Gerst closed its doors in 1954 and the Nashville beer scene practically died for almost 30 years.

“The door was wide open for any entrepreneurs who might want to brew a beer that demonstrated any level of complexity superior to the watery light lagers that had become the darlings of the uneducated palates of Nashvillians.”

And the current craft-beer era for Nashville and its surrounding areas is the biggest and best of them all. In fact, all 14 breweries that opened in Middle Tennessee since 1994 still operate today. That is a huge success. As of 2014, when the book was published, all of the local breweries are represented, including but not limited to Yazoo, Jackalope, Turtle Anarchy, Fat Bottom, Mayday, Tennessee Brew Works and Little Harpeth. Each brewer took different paths to open their brewery and each one has a great backstory.

Out-of-town breweries that have contributed to Middle Tennessee’s craft-beer culture are also included, along with contract brews, future beer projects and failed breweries, but each of these topics are only touched upon. I would have liked a little more information on each of these subjects, but specifically those failed breweries of Middle Tennessee. Surely there’s more than just a few that have recently failed.

Nashville Beer, as a book, provides great source material, but some of the information is outdated. Since the book was printed, Boscos closed, Yazoo now cans its beer and some brewers no longer work at their previous breweries. While not all breweries get the same page count (or the same number of pictures included), Mr. Chamberlain truly emphasizes the local-beer angle of being a Tennessee brewery.

The highlight of the book is learning the history of each of the breweries that have inhabited Nashville and its surrounding areas. I would have preferred a little more backstory behind each of the current breweries, but that’s just a minor complaint.

With homebrewing clubs and beer festivals promoting the local craft-beer scene, along with changes in a triple-layer beer tax and the development of Tennessee Craft Brewer’s Guild into an important lobbying group, the sky is the limit with no end in sight for local breweries to grow bigger and better, with each passing year.

Strength: Great history of local breweries.
Weakness: Constantly changing craft-beer culture has some outdated information.
WTF Moment: A Brewery District is actually created in downtown Nashville and there are currently multiple tour buses that can be used to visit many of the breweries.

Notable Quotes:
– “We had ninety days to raise $1 million.”
– “To make great whiskey, you gotta make great beer.”
– “All of our investors get in the same bed every night.”
– “We didn’t make the same mistakes when we laid out the new brewery. We made brand-new mistakes.”