On the Road With the Rampage Tour of Destruction

Per Matt
Monsters that destroy cities. That was the entire theme of the old-school arcade game, Rampage, which was originally released in 1986 by Bally Midway. The video game became an instant classic as fans of big-screen creature features enjoyed wreaking havoc with their giant animal avatars, totally leveling various cities. Sometimes simple is better, when creating an intriguingly fun game (especially one that eventually becomes a franchise).

Thirty-two years later, Rampage has returned to the pop-culture zeitgeist, this time as a feature film starring Dwayne “The Rock” Johnson, which arrives in theaters on Friday, April 13th. While the overall storyline has somewhat changed, the destruction aspect seems to be intact. Looking back on the original game, what made it so memorable?

As a child of the ’80s, I remember spending many tokens at my local shopping mall arcade playing the original arcade game cabinet. While it may not have been the very first game to offer three-player co-op, having three players working together (or even separately) simultaneously was definitely an attraction. Punch and jump. The controls were simple. Don’t overthink the complexity. The monsters, as characters, offered another positive element. George was a gigantic gorilla that was eerily similar to King Kong. Lizzie was a rather large reptile that acted (and kind of looked) like Godzilla. Ralph was the final character, which was a huge werewolf, although he didn’t exactly look like anything copyrighted from a past creature feature. 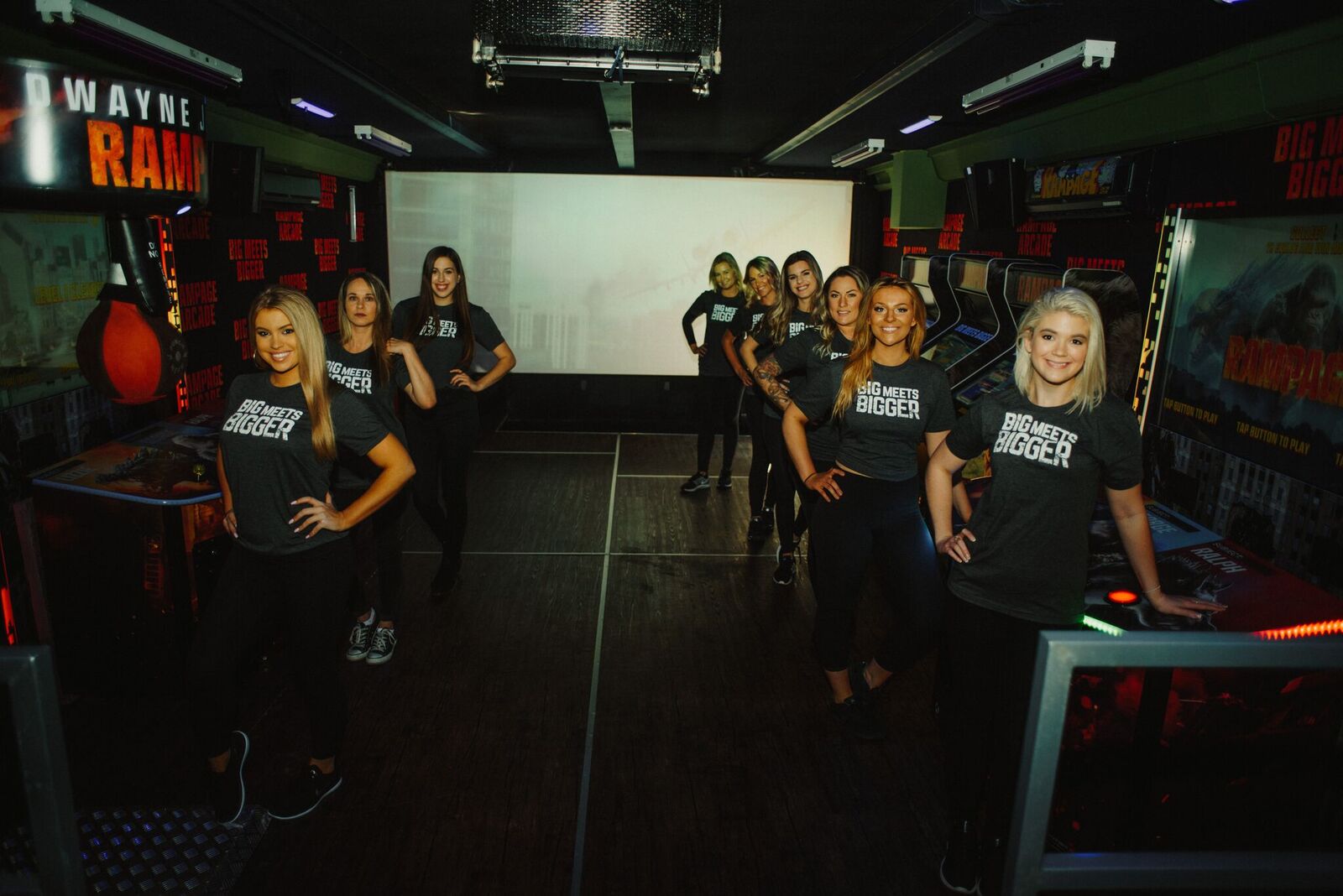 Throughout the years, there’s been a variety of sequels and consoles available to play different Rampage games, but the original is still the best. Promoting the upcoming movie, Warner Bros. is hoping to rekindle the throwback experience for older gamers, while hoping to introduce a whole new generation of fans to the upcoming movie. On Tuesday, April 3rd, Nashville, TN was part of the “Big, Bigger, Biggest” first-look tour, which includes a Cinetransformer truck visiting seven cities throughout the country, playing the movie’s trailer, while offering attendees chances to win Fandango tickets to see the film, along with free posters, rub-on tattoos and free play to enjoy the original game, the new Dave & Busters version, along with a variety of older arcade games. It was definitely a great variety of games.

A representative from Warner Bros. discussed with me how this ongoing live event provides great exposure to highlight the games that transition into the upcoming movie’s storyline of strange creatures. She also discussed how different elements can draw in different crowds to the film. The younger gamer crowd may recognize the brand new game from Dave & Busters, wrestling fans (and other moviegoers) may remember Dwayne Johnson as “The Rock” and old-school gamers may remember a time when these creatures were once humans, not animals in a science experiment that went horribly wrong.

Be on the lookout for the next stop for the Rampage Cinetransformer tour. Phoenix, Tallahassee, Miami, Nashville, Dallas, New Orleans and a seventh city is TBD (although there’s a good chance it could be Kansas City). 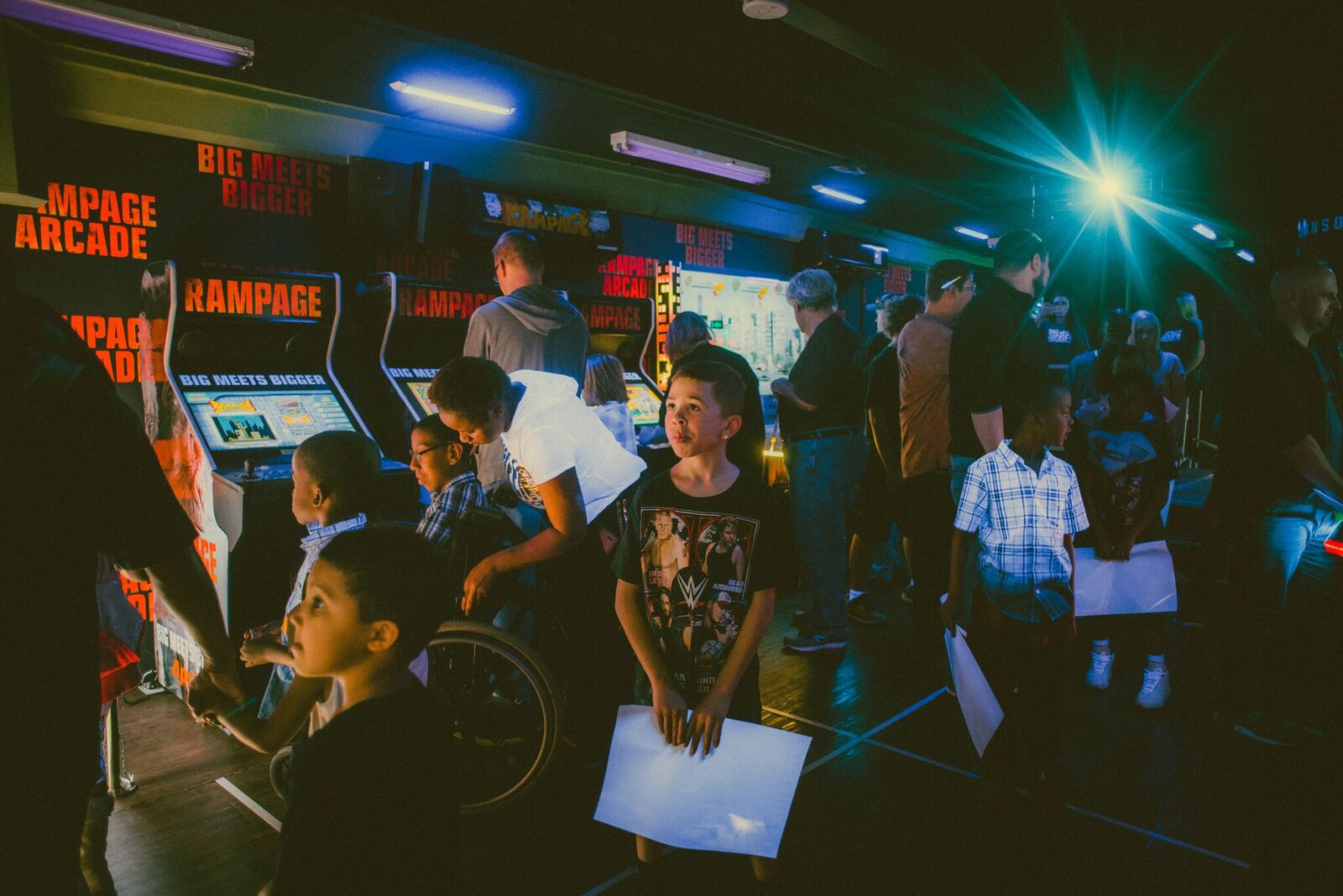