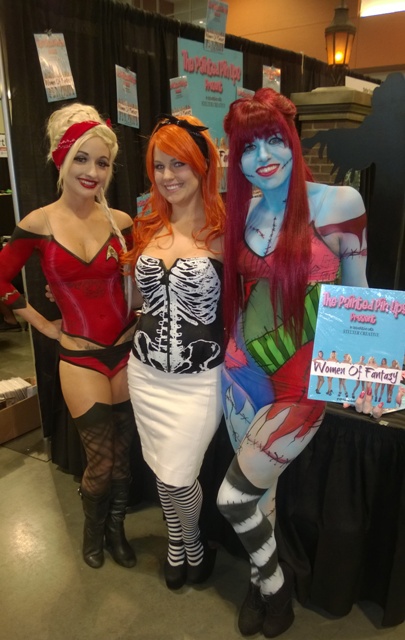 Per Matt
When it comes to unique cosplayers, The Painted Pin Ups aren’t afraid to interpret classic characters while showing more than a little skin.

Appearing at Wizard World Nashville Comic Con, The Painted Pin Ups were quite popular throughout the weekend-long show. In my interview with Laura Alexandra, we discuss the painted art of cosplay, making nude appearances in the pin-up calendar and geeking out to classic cosplay costumes.

Please tell me a little about The Painted Pin Ups.
– “The Painted Pin Ups are a collaboration of sci-fi and comic-book characters that have been body painted, in real life. It’s supposed to be a modern take on a classic, pin-up style calendar.”

How many people are in this group?
– “There are 12 models, total, for 13 months, all body painted and full nude, from head to toe.”

Where is your group based?
– “We are based out of Orlando, FL.”

How did you initially get into cosplaying?
– “I kind of fell into it. I’ve always done the pub crawls and the dress-up stuff. For my birthday, one year, I had everyone dress up as nerds… that was the only way they could come. So, it’s always been something that I’ve been interested in. I really love costumes and dressing up, being out of the norm. I’m definitely not a person who just sticks with the everyday dress-up routine. I definitely like to be outside of the box and creative. It’s the perfect outlet, for that.”

Do you often cosplay outside of the body painted costumes?
– “Usually, body painting is for the calendar. Outside of body painting is definitely something that has been expanded, into my wardrobe. I really do like the dressing-up aspect of it.” 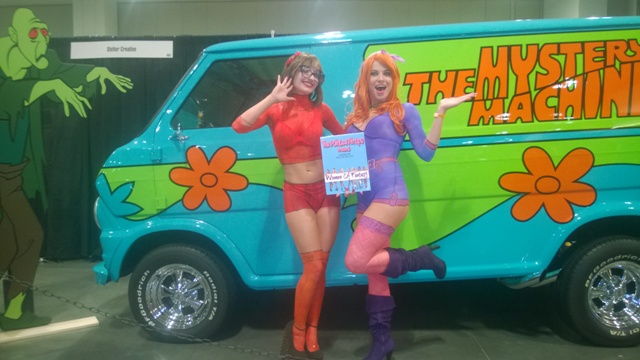 How many have you made, throughout the years?
– “Quite many, actually. I don’t have a number, off the top of my head, but I definitely made quite an assortment of costumes. They’re all tucked under my bed, into their special costume compartments.”

What costumes are you most known for wearing?
– “I’m mostly known for Sally. That’s a solid one, because that’s who I portray in the calendar. I’m also Khaleesi, in the calendar, from The Game of Thrones.”

How long have you been cosplaying?
– “I started several years ago. I’ve just gotten more into it over the years, the more I started doing it. Now that we’re traveling with Wizard World and going to different conventions, it’s definitely become more of a permanent part of my lifestyle.”

What kind of advice would you give to beginning cosplayers?
– “Just take the time and don’t get discouraged, when you’re making your costume, for the first time. Take the time to appreciate what you’re doing. A lot of people feel like they fail when they don’t get their costumes exactly like the replicas. But it’s all about the effort and the love you have for the character and the costume and the appreciation.”

Is Wizard World Nashville the first convention you’ve attended for Painted Pin Ups?
– “No, it is not. This is actually our second one. We were in Chicago for our first Wizard World convention. We’re also going to Reno, towards the end of November.”

What are some of the costumed characters you’ve portrayed this weekend?
– “I have been Sally, from The Nightmare Before Christmas, Harley Quinn and Daphne from Scooby Doo.”

What are you currently geeking out to?
– “Just pin ups, lately. Just the way that everybody else has their interpretation of classic comic-book characters in the pin-up style. Obviously, I’ve gotten more into it the more calendars I’m in and the more Comic Cons that we go to. It’s just really cool. I kind of get excited and geek out to the other costumes, personally. It’s super exciting to see something that brings you back to when you were a child and you have that nostalgic moment.”

“We were at the Chicago Comic Con and there was The Brave Little Toaster made by a fan. He was dressed just like the character and I literally stopped what I was doing because I was distracted by him. I had to get a picture with him. It’s probably my most memorable and most geeky moment, for sure.”

Are you a gamer?
– “I’m not a gamer. I’ve tried to get into it. I used to play Crash Bandicoot and stuff like that, when I was much younger, but that was mostly because of my brothers. They were the big gamers. When I started living on my own, I did the dress up and the sewing. I’ve never been a hard-core gamer, so I can’t really say much about that aspect of it.”

What’s been your highlight in Nashville?
– “Definitely how friendly everyone has been. The feedback has been wonderful. I love this town. It’s a beautiful place. The costumes are amazing. I don’t have a specific highlight. The entire con has been my highlight.” 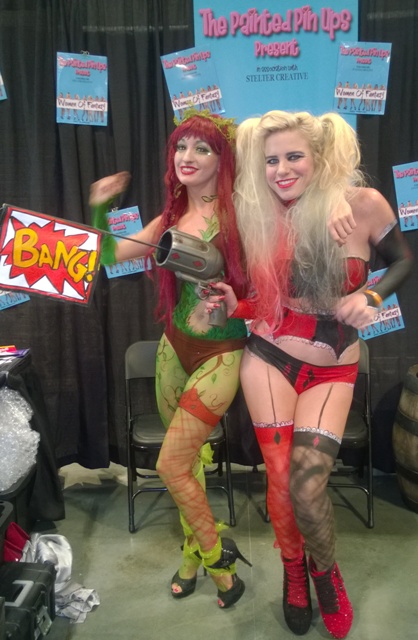