Years ago (1993, to be exact), Bill Murray starred in a fantastic film aptly named Groundhog Day, about a jaded weatherman named Phil sent on a demoralizing trip to Punxsutawney, Pennsylvania, to cover the annual Groundhog Day event. While stuck in the small town, Phil finds that he is trapped in a time loop, having to relive the day over and over again. Nothing he could do changed that, including suicide! It wasn’t until many iterations that he was able to figure out the awesome power of love, which kicks his ass out of the loop and back into the real world.

Phil was lucky. He was stuck in 1993, a relatively nondescript year. Could you imagine being stuck in a time loop in 2020, the year of the Coronavirus? That would turn this lighthearted rom-com into a vile, hellish horror film that even I would hate to view.

Luckily, Palm Springs was filmed before the pandemic days, even though it was released early in 2020. Palm Springs is directed by Max Barbakow and stars Andy Samberg, Cristin Milioti, Peter Gallagher and J.K. Simmons. The film was released at the Sundance Film Festival in January, and was later picked up by Hulu in July.

The relatively small film history of Barbakow worried me. Checking out his IMDb page, I saw several early directorial entries, but all were just short films or documentaries. Jumping from short-form content to a full-length feature film is a major move, one that usually has a very rocky start. This made me have concerns about Palm Springs, so I wanted to check it out to see how well Max Barbakow could pull it off.

Palm Springs takes place in Palm Springs (I know… you are surprised as I was). Nyles (Samberg) wakes up with his girlfriend, Misty (Meredith Hagner), as she is getting ready for the wedding between Tala (Camila Mendes) and Abraham (Tyler Hoechlin). During the reception, maid of honor Sarah (Milioti) discovers that Misty is cheating on Nyles, and goes to tell him. In a drunken moment, Nyles and Sarah start to hook up in the desert, when Nyles is shot by an arrow from a man named Roy (Simmons). Injured and scared, Nyles makes his way to a mysterious cave. Sarah follows and is sucked into a vortex.

Waking up, Sarah discovers that she is now in a time loop with Nyles, who confirms that he has been in it for quite some time. Sarah tries everything she can to get out of the loop, from committing acts of kindness, to suicide and even trying to drive away from Palm Springs.

Finding that nothing works, Sarah temporarily gives up and joins Nyles in trying to come up with more ideas on how to escape. Nyles explains to her that Roy is a man he met at the wedding. While under the influence of drugs, Roy tells Nyles he wished the night would never end, so Nyles took him to the cave to trap him in the time loop, as well. With this knowledge, Sarah and Nyles agree that whatever they do to escape must also include Roy, and this helps fuel some of their further ideas. 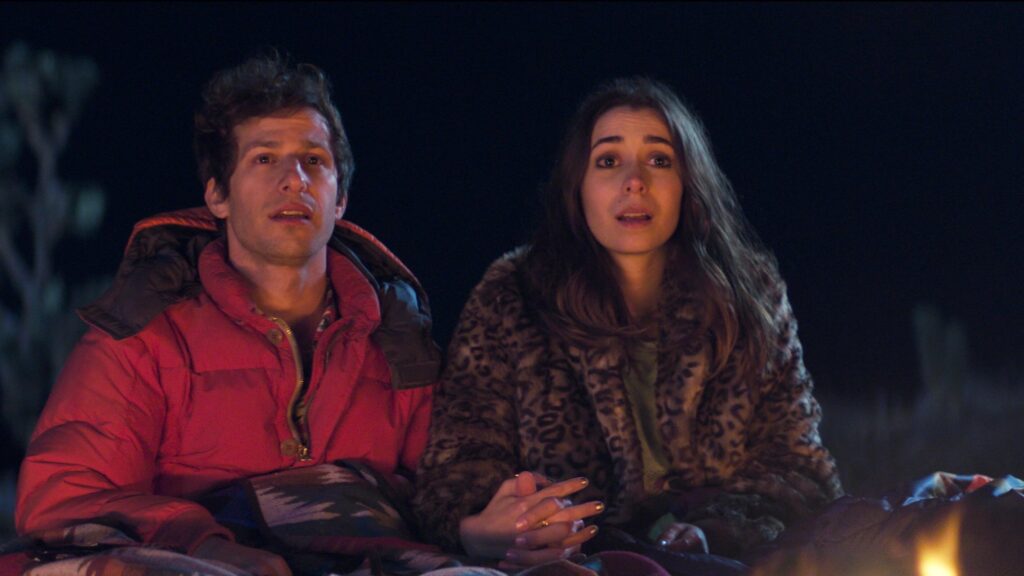 I am not sure if Max and the writing staff intended to follow the formula and premise of Groundhog Day, but from an outsider looking in, it definitely can be felt. In both Palm Springs and Groundhog Day, the protagonist is stuck in a time loop. They both do dangerous stunts since they have no consequences, as they will just wake up back in the loop. Even the general feel of Palm Springs compliments Groundhog Day. Maybe it is ’cause they are both romantic comedies and focus on budding relationships over things like solving murders (as in another time loop film called Happy Death Day). Whatever the reason, Palm Springs is in many ways a modern-day clone of Bill Murray’s classic.

That being said, Palm Springs does enough to not be an exact replica. The film has three people stuck in the loop, as they live through the day over and over again, having their own experiences. The source of the loop is somewhat known, found inside a cave near the wedding venue. And, unlike Groundhog Day (spoiler alert incoming), the key to escaping the loop is not tied to love or relationships or anything like that. Instead of one main character to follow, Palm Springs has to focus on several, and does it perfectly. I actually felt like I knew all the characters very well. They are memorable, unlike everyone who’s name was not Bill Murray in Groundhog Day.

Palm Springs is a truly great find in this year’s movie offerings. I give it a five out of five stars. I have recommended this to several people, and while all have said it reminded them of Groundhog Day, they said that Palm Springs is different enough to be a rival film. If this is the quality of film we can expect from Max Barbakow, I am ecstatic to see his next full-length film. Could Palm Springs be the best film of 2020? I, for one, wouldn’t be surprised.