It’s funny to think that with all the superhero movies coming out in 2018, the one I would be looking forward to the most — yes, maybe even more than Avengers: Infinity War — would be an animated movie. Incredibles 2 is slated to come out June 15, 2018. Originally, it was scheduled to come out during the summer of 2019. We were supposed to get Toy Story 4 this summer, but because its production seems to be lagging behind, the two Pixar movies will be swapping release dates.

And you know what? I’m totally cool with that.

The Incredibles is honestly my favorite Pixar movie. When I heard that Brad Bird was returning to write and direct the sequel, I was very excited. Brad Bird is a marvel at writing and directing animated features. His movies touch our hearts and give us feels. For instance, many kids of my generation grew up with The Iron Giant. Who doesn’t get choked up when they hear The Iron Giant say, “You stay. I go.” Mr. Bird also wrote and directed my third favorite Pixar movie: Ratatouille. Some people at the House of Mouse are just brilliant at writing and directing, while others working for Disney are not (I’m looking at you, Rian Johnson and your disappointing fans in Star Wars: The Last Jedi).

At any rate, I’m surprised that Brad Bird hasn’t directed more animated movies. I figured he was too busy trying his hand at live-action blockbusters, directing films like Mission Impossible: Ghost Protocol (the one where Tom Cruise scales the Burj Khalifa skyscraper in Dubai) and Tomorrowland. But I learned that Brad Bird didn’t want to just make another sequel. He had a lot of ideas he wanted to piece together. He didn’t want to make another Incredibles until the script was just right.

And you know what? I can respect that. 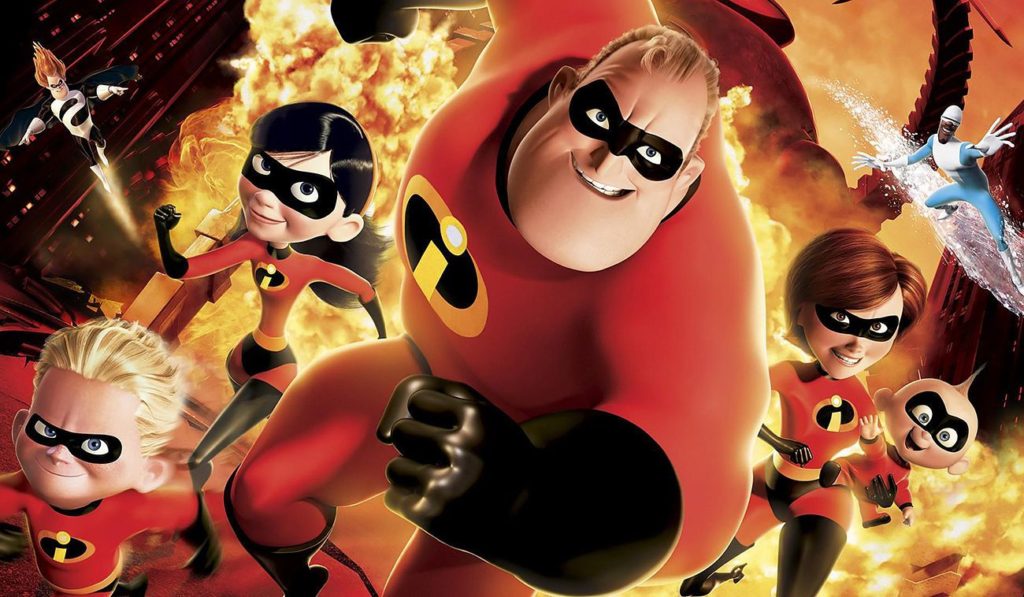 The Incredibles came out in 2004, so we’ve had to wait quite a while for this sequel. But it’s not the “15 years too late” quote from the villain Syndrome that people on the internet have been slapping on their memes. I personally don’t mind waiting, if it means the script is good. Plus, all the main cast is back onboard, except for the kid who voiced The Incredibles’ son, Dash, cuz that kid’s gone through puberty and his voice has changed. But the voice actors for Mr. and Mrs. Incredible, their daughter, Violet, their family friend and fellow superhero, Frozone (voiced by Samuel L. Jackson), and the villain The Underminer — who we saw pop up at the end of the first film — are all back. Of course, Brad Bird will once again voice the comic-relief superhero, fashion designer Edna Mode. I guess in some ways, Brad Bird is like director Taika Waititi, voicing a hilarious supporting character (you can read about how much I enjoyed Thor: Ragnarok here).

There are also some new actors joining the voice cast: Bob Odenkirk, who most people know and love from Breaking Bad and Better Call Saul. And Catherine Keener, who played Missy Armitage in Get Out and Maxine Lund in Being John Malkovich. But both their roles have only been speculated upon.

We don’t know too much about the upcoming plot. We do know that this movie picks up directly after its predecessor. The Underminer, mirroring the villain The Mole Man from The Fantastic Four, announced his presence at the end of The Incredibles. “Behold, the Underminer! I’m always beneath you, but nothing is beneath me! I hereby declare war on peace and happiness! Soon, all will tremble before me!”

But whether he’s dispatched quickly by Pixar’s first family of superheroes and sent packing remains to be seen. I wouldn’t put it past them to suddenly have Bob Odenkirk or Catherine Kenner voice a new villain.

We do know that while the first film focused on Mr. Incredible, the sequel will focus on the superhero exploits of his wife: Mrs. Incredible. She was the superhero Elastigirl before they got married. I’m cool with Mr. Incredible being a stay-at-home dad. He had a good story arc in the first film, so it’s time for his better half to have one. And I liked the premise of Mr. Mom… but that’s mostly because I love the acting of Michael Keaton, as those of you who have read my article here well know.

We see in the teaser trailer that while caring for their three children, Mr. Incredible is thrilled to discover that their toddler, Jack-Jack also has powers. Of course, those of us fans who’ve watched the animated short, Jack-Jack Attack, already know this and what his unsuspecting babysitter had to go through. It’ll be interesting to watch how The Incredibles family copes with having a son with such a vast array of powers, in much the same way that The Fantastic Four family in comic books had to cope with their son, Franklin Richards and his variety of powers.

The Incredibles is pretty much The Fantastic Four, except all the roles are reversed and they swapped out the powers of The Human Torch for The Flash. But after four Fantastic Four movies (if you include the unreleased one in 1994), Marvel still hasn’t captured the family dynamic as well as The Incredibles. Hopefully, some future writers and directors will be in theaters taking notes this summer. I’ll definitely be in theaters this summer, but I’ll be too busy enjoying the movie to take notes.