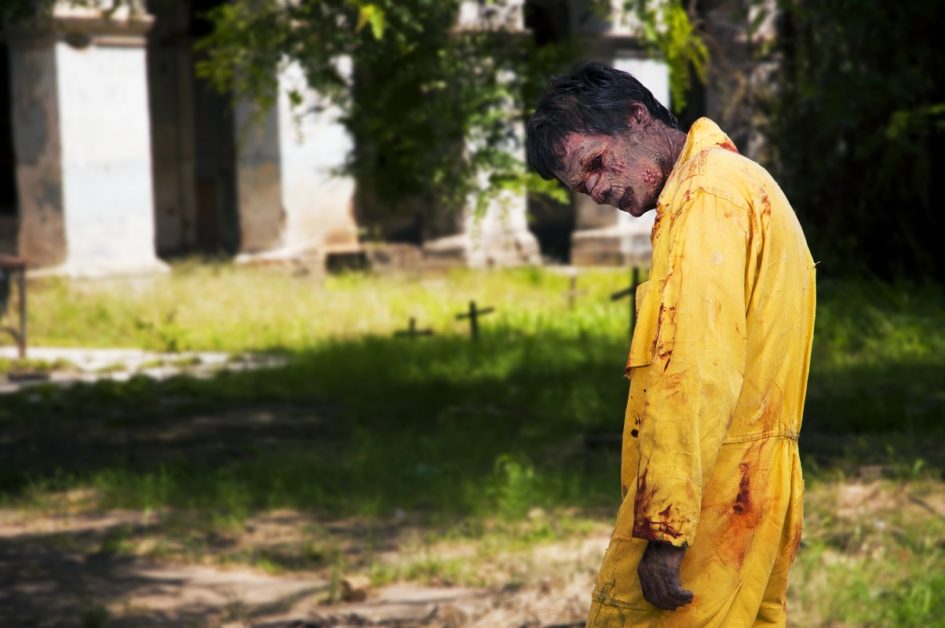 Welcome back to another episode of #HauntLife, my semi-weekly rantings and reviews about dark pop culture. This week I am going to review the foreign film Porto Dos Mortos, which translates to Beyond the Grave. This film was released in 2010 from writer/director Davi de Oliveira Pinheiro and stars Rafael Tombini, Alvaro Rosa Costa and Ricardo Seffner.

The film is set in the post-apocalyptic future. I know, it has been done before a lot. I mean, almost every movie coming out of Hollywood that is set in the future seems to grab onto that cliche. Movies like Mad Max, I Am Legend, Zombieland and dare I even mention Waterworld all seemed to have figured out that the end of society sells. Add in that TV networks are in on the hype (yes, I am looking at you, AMC), and it seems like every few days the world ends again. But for me, I kinda like seeing the takes on what would happen. They draw upon one another, but they still weave their tales slightly differently. It’s compelling media.

Porto Dos Mortos is the story of a man in black. Not the Will Smith type, but more like a man who just chooses to dress in complete black. He never gives his name, but it is revealed he was a police office prior to the fall of civilization. As the movie opens, we see this stranger enter into a room with a group of three men. Taken by surprise, the group attempts to defend themselves, but they are quickly killed by the officer. As he finishes up his search of the room, he is attacked by what I can only think is a modern-day ninja with a katana. Our officer survives magically and the movie begins.

Soon, the officer meets a group of survivors. He reveals to them that he is looking for a demon he calls The Dark Rider. His goal is to bring this monster to justice, but so far his attempts have failed, mainly because The Dark Rider has the ability to possess others, thus changing his form repeatedly. However, the fact he wears a tan coat, a brimmed hat and gas mask tends to help find him.

Later in the film, The Dark Rider appears with his two-man crew: One guy has a bow and arrow and kinda reminds me of an Indian warrior, and another dude with a bag that lets him paralyze people. He kills two of the survivors before appearing to kill the officer.

But wait a moment… now we get a flashback showing someone shooting The Dark Rider, causing him to change into a new host.

Back to current time, the officer wakes up back at the hideout of the remaining survivors who he met. He then plots to find The Dark Rider (again).

And he does. Not sure if he kills him or not, because the ending kinda left it open.

Yeah… that was pretty much it.

Now is the time when I usually try to talk about the good, the bad and the ugly. And usually I am able to clearly find all three. With this film, it’s kinda hard to find the first. Got plenty of bad and ugly, but finding the good in this is like finding a hamburger at Chick-Fil-A. So, I am going to start with the bad, then the ugly, and circle back to the good.

Almost everything about this film was bad. The movie’s synopsis reads: “In a devastated post-apocalyptic world where the rules of reality are transformed by magic and madness, a vengeful police officer searches for a possessed serial killer in a battle of the not-so-good versus absolute evil.” Nothing in this film screams “post-apocalyptic.” The buildings look old, but nothing you don’t see taking a drive through the country. The roads are all clear of debris. Nothing looks out of place. Part of the idea of “the end of the world” is that it looks destroyed, not unkempt.

Another thing that I found bad was the story. I get the main character was after The Dark Rider ’cause he was a serial killer, but for the level of motivation the officer had, there had to be something deeper. The motivation was just not easy to understand. Plus, there were little jokes or hints at a backstory that just never were explained. For instance, the officer hates candy and violently protests against it, but why? Was there someone who died close to him that was taken away? That would somewhat explain it. It just seemed like the backstory was known by the writer, but never made it to the movie.

As for the ugly, you don’t have to wait long. As mentioned in the first scene, the officer enters a room with what we believe to be three bad guys. He pulled his gun when one reaches for his sword and unloads to shots into that guy. The other two look at each other and prepare to attack, only be to be shot. But the officer only shot one bullet. He cocked the gun with his first movement, but somehow that action killed one of the guys while the bullet killed the other. It was one of those unforgivable moments that should have been fixed in post or just simply re-shot. It would have been a really easy fix that somehow made it into the final product.

Also on the ugly side are the Zombies. For the most part, they just look like people with pale face paint and dark shadows under their eyes, kinda like an emo nerd after an all-night Warcraft raid. They were completely pointless to the story, without even so much making moves to attack. Yes, there were a few that were done decently, like the blind Zombie, but this movie could have completely left them out of the film. They were more like puppy dogs than something to be feared. In fact, the officer just mean mugs one near the end of the film and it just saunters off like it was heading to Mordor to deliver the ring. Just made no sense to me.

The good? Gotta say the premise is about the only good thing in this film. It may have been done before, but with a little work, this could have been an interesting and cool film. Instead, we got a gunked-up mess that failed to deliver on any of its promises.

Needless to say, I give this movie one out of five stars. And I really wish these were imploding stars, so it would take this garbage with it.