I wanted to come up with a catchy title for this piece but, when a movie already has a title like Dolphinman Battles the Sex Lobsters, what else do you need? It’s a touching piece about love, faith, and a scorching case of venereal disease engineered by a mad scientist whose ultimate goal is both sinister and bizarre. The short film from Troma is just one of the many new titles currently available from the production company’s new streaming service, Troma Now and is also making the rounds in the film festival circuit. It features one of my favorite characters from Lloyd Kaufman’s ever-expanding ensemble of bizarre characters, Sgt. Kabukiman NYPD in a tale so twisted, only Troma could tell it.

Picture it: Ireland, 1897. In a pub run by a man named Cunter, we hear told a prophecy handed down to the barman from “Jesus the Christ” himself, about a hero from a small town in America called Tromaville, saving the world from a seriously uncomfortable infestation. Fast forward to 2017 and we find the sexually voracious Sgt. Kabukiman actively humping his way across the town in part of an ongoing Saint Paddy’s Day orgy after spending Valentine’s with his favorite woman of the evening, Double Dementia. Meanwhile, everything is playing out exactly as the nefarious Dr. Zac Amico, HPV had planned. Soon his mutant sex lobsters would complete their work, building a scale replica of Tromaville in Sgt. Kabukiman’s nethers. He will shrink himself down, use Kabukiman’s DNA, and create an army of Kabuki-clones to fornicate with.

There’s only one man, er, thing that can stop him: Dolphinman. Summoned by Kabukiman’s psychic pleas for help, after, of course, trying to summon The Toxic Avenger and Mad Cowboy. Shrinking himself into tiny Tromaville, Dolphinman lives up to the movie’s title, battling giant lobsters, seducing the Lobster Queen, and battling the evil Dr. Zac Amico until he finally manages to detonate a bomb that takes out the entirety of the tiny Tromaville and puts an end to the mad doctor’s evil scheme.

At fourteen minutes, Dolphinman Battles the Sex Lobsters is a unique kind of short film. The characters are absolutely bizarre and wild with Dr. Zac Amico, HPV being a scene stealer with some of the best lines, craziest appearance and this strange sort of villainous voice that makes me hope we’ll see the character again in the future. The film is also delightfully low budget, which is just a part of Troma’s “we don’t give a fuck” approach to filmmaking. Lloyd Kaufman has made it his mission throughout the years to give Hollywood the finger and the movies produced by Troma are meant to be fun for the cast, crew and audiences. The acting is usually on a par with an amateur porno and full of ultra-violent, ultra-gross effects and plots that make any sane person ask, “The hell did I just watch?” But that is the charm of Troma. It’s a radical way of making movies that most studios would never dare to take a chance on. 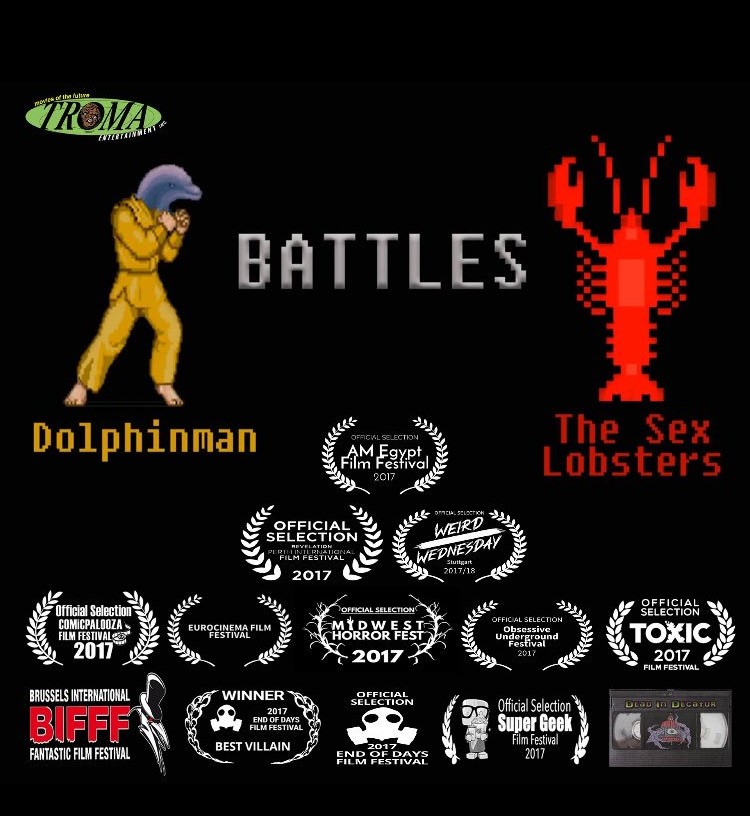 Clearly, though, it’s working well. Troma has been producing these beautifully schlocky masterpieces for over 40 years and Dolphinman Battles the Sex Lobsters has been critically acclaimed, receiving numerous nominations and a huge amount of fan support. Do yourself a favor and check out Troma Now. There’s all your favorite titles from New Jersey’s biggest schlock exporter and Dolphinman is definitely worth fifteen minutes of your day.