Preacher Hits the Road for Season 2 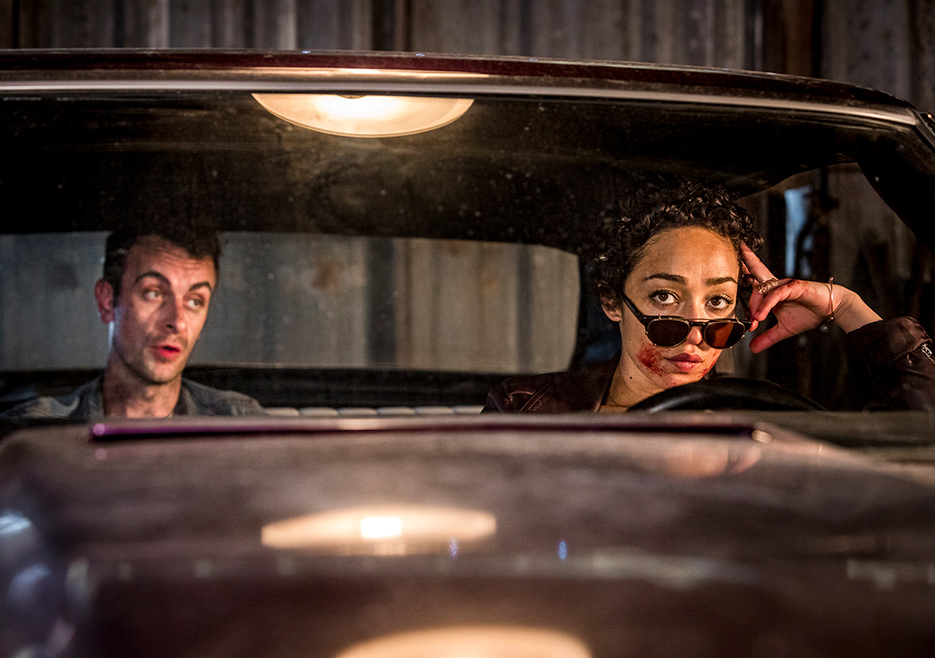 Highly touted as the TV series brought to you by the producers of This is the End and Sausage Party, Writers-Directors-Producers Seth Rogen and Evan Goldberg proudly bring back Preacher for Season 2 on AMC.

In the two-part season premiere, Jesse (Dominic Cooper), Tulip (Ruth Negga) and Cassidy (Joseph Gilgun) are taking a road trip. Having left Annville behind in the dust, this ragtag crew is on a mission to find God and learn the truth about Genesis (Jesse’s supernatural powers). Along the way, they’re being chased by The Saint of Killers. As “On the Road” opens, the trio gets involved in a killer car chase orchestrated to the song, “Come On Eileen,” which is pretty great. As nonstop explosions and body parts fly throughout the screen, showcasing some incredible practical special effects, it’s clear that Season 2 feels like a totally different TV show from its predecessor (which was a prequel, of sorts, in terms of storyline to the comics source material).

Jesse’s minister friend has extremely unorthodox ways and not many answers, but that’s why there’s whiskey. Meanwhile, Tulip disagrees with Jesse’s “smoky brain hand” mind invasion superpowers. And, apparently, God likes jazz. That and the Jessie-Tulip romance has blossomed once more.

In “Mumbai Sky Tower,” the second episode of the season, Jesse comes face to face with The Saint of Killers. In true horror-movie fashion, he may have finally met his match. After a narrow escape, the trio travels to a nearby casino, hoping frenemy Fiore can answer some of their questions. Known to the rest of the world as The Amazing Ganesh, Fiore is one of the Adelphi angels sent from heaven to return Genesis. Failing his previous mission, he now partakes in parlor tricks. Rejuvenating parlor tricks.

It is revealed The Saint of Killers is not just a ghost story. He’s not quite human and wants to kill Genesis (along with Jesse). Also, he’s been hired by Fiore, who’s the only one capable of stopping him. Cassidy’s very particular set of skills are on display and Tulip’s unfortunate run-in with a previous associate interrupts a spur-of-the-moment wedding. A doublecross, a desperate call to find peace and a promising N’awlins trip to follow the music wraps up the episode.

Two episodes in, and this over-the-top TV show has pulled a 180 in terms of its storytelling vibe. Preacher is an over-the-top TV show that feels incredibly rejuvenated after returning from its hiatus. It’s very gory, very bloody and very violent. There’s plenty of great mood lighting and cinematography, while more of the mythology is slowly revealed without slowing down the on-screen action. Having not read the source material, I don’t know what to expect from this TV show and I’m loving every minute of it. It seems so random at times, the unexpectedness is about the only thing that can be expected. Clearly, music plays a huge role for this season, depicting the mood and direction for the characters, as well as being a central destination, as the focus shifts to New Orleans (I can’t wait!).

There seems to be a common theme between the two seasons: In the first season, the Adelphi angels were after Jesse. Now he’s being hunted by The Saint of Killers. Will Jesse (and by an extension, his crew) ever settle down?

So far, Season 2 feels like it’s filmed more like an action movie with supernatural and comedic elements. Already, this season is off to a break-neck pace, far exceeding the meandering of last year’s storylines. What’s the status of Arseface (Ian Colletti)? Apparently he’s still lingering in Hell. That’s just one of many characters that I can’t wait to see worked into this season’s storyline. Others yet to appear include Herr Starr,  Lara Featherstone and Hitler!

Now’s the perfect time to start watching this show, just in case you’re still on the fence. You don’t really need to know the ins and outs of the backstory. If you haven’t watched Preacher already, you should definitely give it a chance.