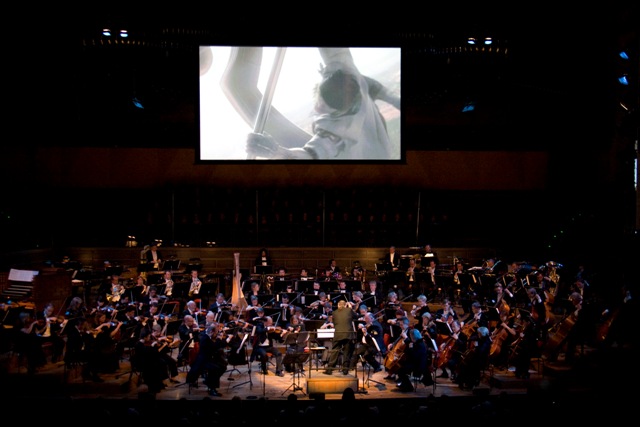 Appearing for the very first time, Distant Worlds: music from FINAL FANTASY finally arrived in Nashville. Music Director and Conductor Arnie Roth brought a great arrangement based on the many FINAL FANTASY video games, performed by the Nashville Symphony. The concert was accompanied by stunning high-definition visuals, which were projected above the orchestra. My favorite moments came whenever the older games were highlighted, in all their 8-bit glory.

Last year was the 25th anniversary for the video game franchise, which also marked a year-long world-wide celebration for the production, which has been touring since 1999. Some of the Celebration medleys were performed, as well a few new ones to go along with some of the franchise’s classic songs.

Two highlights of the concert featured different musical styles. A classical guitar medley focused on Flamenco music and guest vocalist Kim Keyes sang two of the franchise’s pop songs, including the emotional Kiss Me Good-bye. One of my neighbors in the audience was moved by her wonderful voice, even breaking down and loudly crying. It was that good.

My favorite song of the night was from the Chocobo medley. Although there was no choir included with this performance, there was plenty of audience interaction, singing along as the lyrics popped onscreen.

There was a great assortment of instruments included with this performance, including many strings, horns and a variety of percussion instruments. At the show’s conclusion, Mr. Roth mentioned hoping to return to the Schermerhorn with Distant Worlds so he could hear a FINAL FANTASY song performed with the fantastic pipe organ at the rear of the stage. Even though Composer Nobuo Uematsu was not in attendance, I hope he makes the trip when Distant Worlds returns… hopefully it won’t be another 15 years before the show arrives again at the Music City.