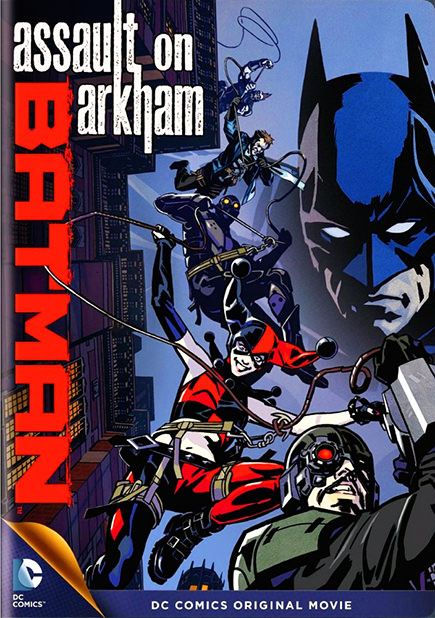 The latest DC Universe Animated Original Movie is a doozy. This one focuses on Task Force X, a top-secret government program enrolling villains, vigilantes and convicts for, you guessed it, a suicide mission. Naturally, this movie features a Rogues Gallery of Batman’s arch-enemies.

The movie focuses on The Riddler, who has stolen a confidential government file and is currently locked up in Arkham Asylum. That means all the bad guys must learn to work together, break in, retrieve the file and attempt to keep a low profile, so Batman won’t interfere. Doesn’t sounds impossible enough, right? As a backup plan, each Suicide Squad member has an embedded sensor under their skin that will explode, just in case they act up.

Pulling the strings of the Suicide Squad is Amanda Waller, the mysterious government operative who was previously introduced in the animated TV series Justice League and Justice League Unlimited. There’s quite a few missions within missions for the squad, which keep you guessing what’ll happen next.

What’s all this mean? Harley Quinn, along with a bunch of C-list characters of the DC Animated Universe are featured in an interesting storyline, characters whom I haven’t seen showcased in every other TV show or movie, which was refreshing.

Oddly, the more-established characters take a backseat to the newbies and feature several out-of-character moments, including The Joker screaming “I’m here, bitches,” which seemed forced, even for him. With violence, nudity, sex and cursing galore, how this movie could be remotely rated PG-13 is beyond me.

The animation was great, borrowing the movie’s look from past animated movies and the video game series. Speaking of games, the setting for this movie takes place within the Batman: Arkham video game universe, which explains why some of the action scenes heavily borrow from the Rocksteady video game franchise.

Overall, this was cool movie featuring anti-heroes, although the added mature themes felt superfluous. Tacked onto the end is a cool preview to Justice League: Throne of Atlantis. I’ll be looking forward to it!

Strength: New characters showcased in an original storyline.
Weakness: Unnecessary violence, nudity, sex and cursing.
WTF Moment: I was unaware Poison Ivy can kiss the boys, turning them into Zombies.