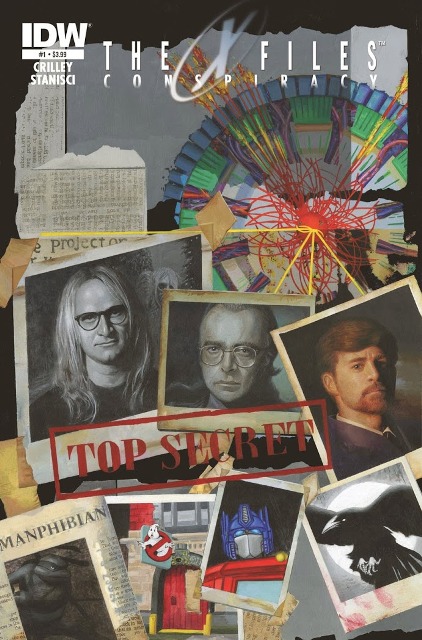 There’s no tale too tall to be told (or believable) in The X-Files: Conspiracy!

Those lovable, loony hackers with major conspiracy theories, The Lone Gunmen, are featured in this hardcover trade paperback published by IDW.

When John Byers, Melvin Frohike and Richard “Ringo” Langly receive mysterious information that may have been sent from the future, they seek the assistance of urban legends and hope to prevent a spreading contagion that could lead to an ongoing pandemic, killing millions of people.

Basically, this is a re-introduction of the characters from the ’90s television show, sent on a road trip of epic proportions. But this is no ordinary road trip. It’s also a crossover between other IDW comic book titles, including The Ghostbusters, Teenage Mutant Ninja Turtles, The Transformers and The Crow.

While Agents Mulder and Scully make cameo appearances at the beginning and the ending, the trio is featured throughout the collection. They try to balance being geek geniuses while experiencing slapstick shenanigans. It’s not always successful, but far less painful than watching their spin-off TV series, The Lone Gunmen. AK!

All trails lead to the mysterious Skylogic Systems, which is being investigated for bio-terrorism. Without revealing too much, a virus has been engineered using mutated DNA combined with an alien strand of DNA. Expect heaping doses of Men In Black, alternate realities and a vampire clan, as well.

IDW does a decent job of incorporating multiple titles in the crossover storylines, but the art varies, incredibly, between each issue. Miran Kim’s covers highlight the collection. Unfortunately, the storyline art is atrocious (especially everything found in Conspiracy #1). Many of the characters are indiscernible, looking nothing remotely like the original actors who portrayed them on the TV series.

For rabid X-Philes, there’s Easter Eggs galore. That’s a good thing. However, just like all the other comic storylines concerning the spooky agents, the characters speak unlike their TV counterparts. That’s a really bad thing. There’s also some vulgar language used, which was never a part of the TV series. I didn’t appreciate that, at all.

Overall, Conspiracy provides a decent storyline to update the TV series, leading up to IDW’s The X-Files: Season 10 series.

Notable Quotes:
– “Now that’s one hell of a firewall.”
– “Man, I hate creative evil scientists.”
– “I say we go with the no-poop option.”
– “Stuff always happens on Long Island.”
– “If you see anything with tape on it, don’t touch.”
– “The Crow Cops are here for their sweet revenge!”
– “Go sell your crazy somewhere else. We’re not buying.”
– “We can’t bring these psychos to justice if we’re dead, too.”
– “Let’s just say I don’t think this is going to be a normal case.”
– “I’m surprised they know how to type, let alone solve a murder.”
– “You mean those insanely weird growths bursting out of their skin aren’t natural?”