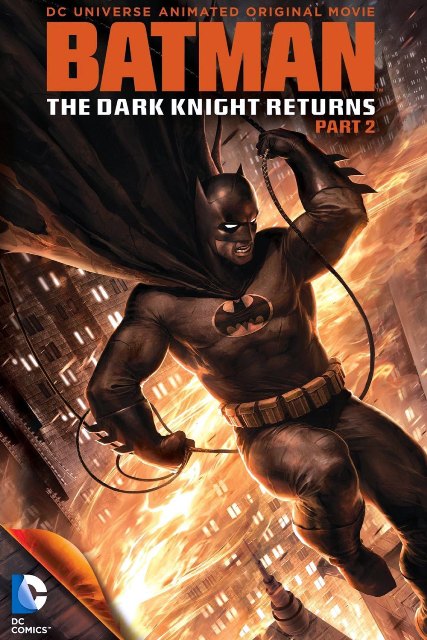 In a bleak, militaristic future, every superhero is considered a criminal. When the elderly, semi-retired Batman makes a rare and violent late-night appearance, incoming Gotham City Police Commissioner Ellen Yindel’s first official act is to issue a warrant for Batman’s arrest.

So, begins, the Dark Knight’s struggles in the animated movie based on Frank Miller’s groundbreaking graphic novel. In Batman: The Dark Knight Returns Part 2, our hero battles forces from all sides, including The Joker and his crew, the GCPD, violent mutant gangs, a hell-bent Superman and even Robin. In fact, this Batman threatens firing his female sidekick, Robin (Carrie Kelley), at every junction. This feels odd, even for a Grumpy Old Man.

A few too many subplots take place simultaneously, which can lead to a little confusion in a 76-minute-long movie (it worked better in multiple issues of the graphic novel). In addition to the aforementioned plot devices, a Cold War squabble over the island nation of Corto Maltese leads to the Soviet Union’s nuclear airstrike. The crisis is diverted when Superman averts the warhead (and its EMP), but he is injured. When the lights go out, Batman leads a mutant gang to fight for peace.

All of these subplots become a large MacGuffin, heading to the Main Event: Superman must bring in Batman. But Bruce Wayne has other plans. Enlisting in Oliver Queen’s services (who could double for a Howard Hughes recluse), the fight ends with an untimely death and a surprise ending.

This is the 12th Batman movie in the animated DC Universe film series and I’ve seen them all. The quality of each movie waxes and wanes a bit, mostly leading to great stories, overall. In this dystopian future, Batman is a bad guy. Much like Christopher Nolan’s The Dark Knight trilogy, this concept is explored (but I don’t seem to fully comprehend it). Can superheroes actually be villians, simultaneously? Either way, The Watchmen did it best.

Having seen so many Batman adaptations, it still feels weird not hearing Kevin Conroy voicing Batman and Mark Hamill voicing The Joker. Even though Michael Emerson’s (of LOST) Joker and Peter Weller’s (of Robocop) Bruce Wayne and Batman are good, the former totally embody their respective characters.

Make sure to hit the pause button for great Easter Eggs! When a red streak rushes past a newspaper stand, The Brave and the Blod, The Flash, Captain Carrot And His Amazing Zoo Crew, ‘Mazing Man and The Justice League of America are among the comic books flying into the air!

The animation looks unlike any other Batman movie (other than Part One). It’s less dark, much brighter, even though it has a darker tone (and PG-13 rating). This adult-oriented animation is a blast for the more mature crowd and I hope there’s more to come.

Strength: An adult-oriented hyper-violent animated vision of Batman.
Weakness: A few too many subplots.
WTF Moment: In this timeline, Selina Kyle runs an escort service!