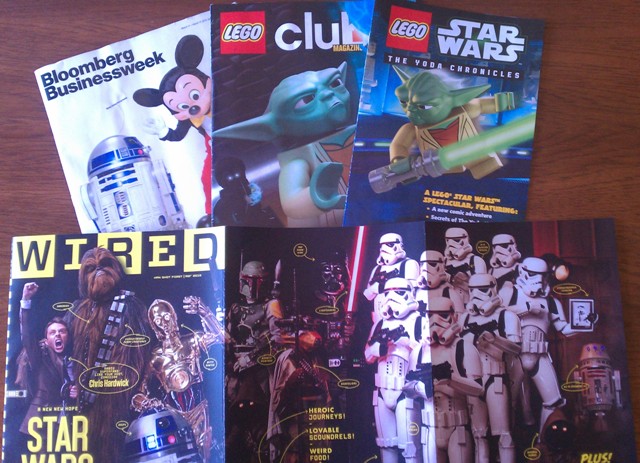 Back in the Dark Ages (throughout the Original Trilogy and just before the Prequel Trilogy), the one sure-fire way to boost magazine sales was to splash anything remotely Star Wars related on your magazine covers. With no World Wide Web filled with galactic science-fiction and fantasy articles, having those magazines was the next best thing.

Oddly enough, the Bloomberg Businessweek cover boasts “Love at First Beep,” a story detailing the inside story of how Disney bought Lucasfilm and its plans for Star Wars. But before going through with the purchase, he needed to know there was enough intellectual property for more movies. There was. In fact, George Lucas (aka The Maker), himself, had done the cataloging of 17,000 Star Wars Universe characters covering 20,000 years into a database known as the Holocron. Brand Communication Manager Pablo Hidalgo helps licensees navigate the overall Universe canon.

Also noteworthy, Jason Swank, co-host of the weekly RebelForce Radio podcast is quoted twice. The remainder of the article focuses on Walt Disney Chairman and CEO Robert Iger and his rise to power, as well as his interaction with Lucas and Kathleen Kennedy. And how it was his mission to purchase branded characters to be used in movies, toys, video games, theme park rides and more. So far, he has acquired Pixar, Marvel and now Lucasfilm.

While the previous were respectively entertaining and factually informing, the next is more humorous in tone. Wired magazine boasts “A New Hope: Star Wars is Back! The Saga Returns! And This Time It’s Going to be Great!” In the article titled “74 Things Every Great Star Wars Movie Needs,” pop-culture celebrities do their best ode to Star Wars. Comedian/Superfan Chris Hardwick (of Nerdist podcast and AMC’s Talking Dead) delves deeply into personal stories revolving around Episode IV: A New Hope, and how he relates to his favorite character (R5-D4). Other notables include Damon Lindelof (Screenwriter & Co-Creator of Lost), Food Network’s Alton Brown, Writer Jane Espenson, Writer/Director Rian Johnson and CNN Anchor/Correspondent Jake Tapper. The article meanders out of control to the point where this superfan lost interest.

And finally, last week, on Robot Combat League, MMA Fighter Amanda Lucas made her grand appearance on Syfy’s Robot Combat League. Her two-person team lost the battle, but beforehand, in an obvious attempt to gain viewers (and ultimately, Geek Cred on the Internet), George Lucas was brought in for an on-screen motivational speech. It was short, but sweet. Highlighted with a make-believe punch. He seemed a tad out of place (and maybe even out of touch with his daughter).

This was the first of hopefully many Star Wars In The News reports.