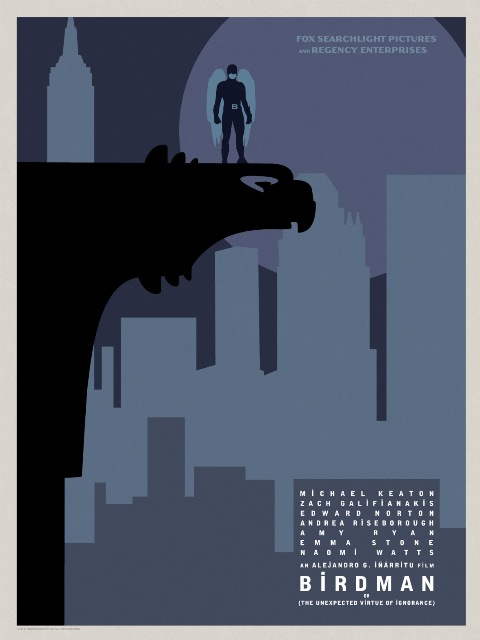 Per Matt
Stop me if you’ve heard this before: A washed-up Hollywood actor (known for playing a former superhero) hopes to reinvent his career by writing, directing and starring in a Broadway play.

While that may seem like an accurate assessment of more than a few actors of a certain age, this movie’s different… not only is the storyline the actual embodiment of Michael Keaton’s career (having previously played the role of Batman, then disappeared), but the movie (along with its format) is actually quite incredible! Initially, I was unsure if I was more interested in the storyline of Birdman Or (The Unexpected Virtue of Ignorance), or more importantly, wanted to see if it really felt like the entire movie was filmed in one take. The movie, itself, seemed a little odd, but it’s that uniqueness that makes it such a great movie.

Michael Keaton stars as Riggan Thomson, whose pain as an aging actor stereotyped into one specific role can be found in many stories, elsewhere. As he tries to prove his self-worth outside of superhero blockbusters, he hopes to prove his critics wrong, who think his theater stay is more than just a vanity project.

Emma Stone is Riggan’s daughter, a recovering addict, fresh out of rehab, who desperately tries to keep her father relevant. Andrea Riseborough and Amy Ryan portray Riggan’s current and former flames, each one bringing out a different side to the complicated actor. Surprisingly, I was most impressed with Zach Galifianakis, who is not his usual annoying on-screen personality. He actually shows some acting range here. Bravo, sir.

While the technical aspects of this movie are incredible (be on the lookout for visual tricks, like looking into the mirror and not seeing the cameraman), I enjoyed the nonstop movement and behind-the-scenes perspectives of a Broadway production. Also, Birdman isn’t just a character for Riggan. It seems to be his conscience, as well as a voice inside his head. I was most intrigued with the possibility of Riggan having actual superhero powers, that are never fully explained in the movie.

Birdman, as a movie, is quite meta. When critic Tabitha Dickinson (Lindsay Duncan) chews out Keaton, she’s calling out all actors (including those represented in the actual movie). They’re “entitled, selfish, spoiled children blissfully untrained, unversed, unprepared to even attempt real art.” Most importantly, Edward Norton is featured as Mike Shiner, a a slimy, despicable method actor who’s only real on the stage. Once he’s off it, he’s a mess. While this could be true of many actors, here Norton parodies himself, for roles such as Bruce Banner in The Incredible Hulk, where he attempted to take over writing and directing duties, before losing favor with Marvel Studios. That’s just another brilliant casting decision, in a movie that’s filled with many more.

This movie exposes Keaton, along with his fellow actors, as they expose the scars, tattoos, wrinkles and insecurities of us all. The featured characters are fractured (as well as stereotyped): There’s the scorned ex, the ignored partner, the unbalanced actor, the relapsing drug abuser and the trying-to-prove-his-worth actor. In this story, they all work well together.

Now I get it. Previously, as a whole, Zombies In My Blog was rooting against this movie at the 2015 Academy Awards, because we really, really enjoyed The Grand Budapest Hotel, but we really, really loved Keaton as Batman, many years ago. We were a little conflicted, to say the least. Now I understand the appeal for Birdman. Not only was it actors voting for a movie about acting, but it actually was quite groundbreaking. It clearly earned its Oscars for Best Picture, Best Director (González Iñárritu), Best Original Screenplay (Iñárritu, Nicolás Giacobone, Alexander Dinelaris and Armando Bo) and Best Cinematography (Emmanuel Lubezki). I only wish that Keaton had won the award for best actor. He’s tailor-made for this role.

Birdman is a worthwhile award-winning movie. I’m only ashamed it took so long for me to recognize its brilliance.

Strength: Great acting, story and cinematography.
Weakness: Movies questioning the price of popularity have been done many times before.
WTF Moment: Is Riggan Thomson an actual superhero with real-life levitation and telekinesis powers? We need a sequel to tell his backstory!!!