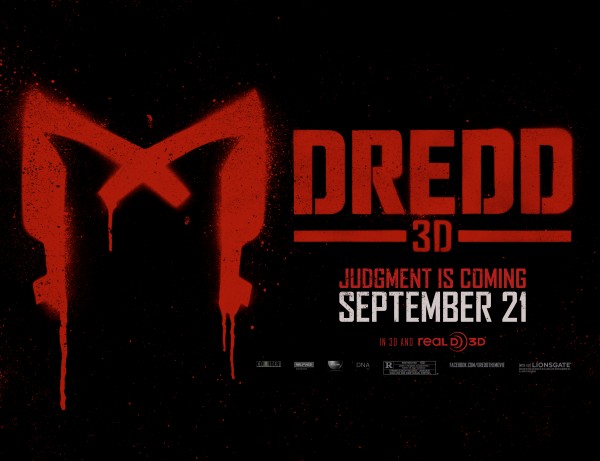 Movies have become incredibly violent these days. Imagining a hyper-violent dystopic wasteland of a future seems a decent — but bleak — possibility for the human race. And when it comes to judge, jury and executioner, there’s no one far better suited than Dredd.

In the future about 17,000 crimes happen per day, but judges can only respond to about six percent of those. Swift-but-just punishment must take place quickly, and when there’s 800 million people living in Mega City One, the Hall of Justice doesn’t have many good guys to spare. On this day, Judge Dredd is escorting a new recruit. A rookie Judge is brought onto the Justice Department, one with a psychic mutation. There’s no word if this mutation is common, or the cause of it, but it’s happened without any backstory whatsoever.

SLO MO, a new illegal inhaler drug, has hit the streets, dealt by the Ma-Ma Clan and led by Ma-Ma (Lena Headey), an ex-hooker who specializes in violence. Dredd, and the Rookie, Anderson (Olivia Thirlby), must traverse a 200-floor skyrise, and by themselves, the two judges must cleanse building of the Ma-Ma clan and solve a grisly murder.

I truly abhor remakes (and sequels, generally). They’re usually unnecessary, and only done to make a quick buck, regardless if there is little-to-no outcry by fans for such films. And generally, they’re done by greedy, greedy film distributors, who would otherwise lose the property, despite their quality. So, we are swamped with useless remakes of films we’ve just seen (including Batman, Spider-Man, Daredevil, Punisher, Ghost Rider, the X-Men, Fantastic Four, and last but not least, Sylvester Stallone’s Judge Dredd of 1995).

That being said, I truly enjoyed Dredd. Super-slow-motion special effects and dystopic atmosphere are top-notch, and while the storyline may be more true to the comic book than the previous incarnation, it’s hyper violent… very, very violent. And the action sometimes gets in the way of the story. Dealing with the effects of a psychadelic drug can be messy business, so the director chose to use a heavy dose of slow-motion action scenes and special effects with excellent results. Surprisingly, the storyline was small in scope, mostly happening inside a skyscraper.

Dredd is a Bad Ass. Karl Urban mugs for the camera more often than not, almost acting robotic, but not cheesy, and never removing his helmet (which broke every character rule in Judge Dredd). Urban perfects a gravelly voice, which is not as embarassing as Christian Bale’s pathetic attempt at voicing Batman, but it’s effective.

Lionsgate was smart to appeal to comic fanboys and men in general, featuring stylistic violence and many attractive women, oftentimes toning down their beauty with heavy clothing and scars. Dredd is what happens when an independent distributor buys the rights to a comic book property, and source material is represented faithfully. If only the other comic book properties could be as effective.

Notable Quotes:
– “Sir, a helmet can interfere with my psychic abilities.”
– “I think a bullet might interfere with it more.”
– “There are no sides. You’re already dead.”
– “How do you want it kids? Body bags or juve cubes? Makes no difference to me.”
– “Ma-Ma is not the law. I’m the law.”
– “As for you, Ma-Ma… Judgement Time.”
– “This isn’t a negotiation. Sentence is death.”