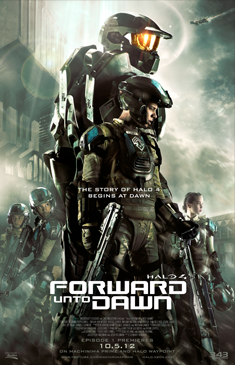 I’ve played the majority of the Halo games, from Halo: Combat Evolved through Halo: Combat Evolved Anniversary (minus Halo Wars), and I’m already hyped to play Halo 4. I’d seen some of the pre-release vignettes and they sparked my interest. I had no idea Redbox would carry the extended version of the movie. So, it was a no-brainer when they released Halo 4: Forward Unto Dawn last week! I needed to watch the movie in its entireity.

What we have here is a 90-minute extended movie, one which has the sole purpose to promote videogame sales. Seems it worked, because I’m looking forward to joining the rank and file, as soon as I save up some money to purchase a copy of Halo 4. Forward Unto Dawn was originally released as a five-part Web Series and is collected on the Halo 4 Limited Edition, as well as on Blu-ray or DVD.

The Backstory: Eleven freshman cadets from various countries have enlisted at Corbulo Academy of Military Science. Their duty: Becoming a soldier of the United Nations Space Command. Their Mission: Prepare to fight not only alien enemies, but also insurrectionists. The cadets doubt themselves and fight each other while failing many training exercises, until cadet Thomas Lasky has a change of heart, and leads his squad to victory during a Capture The Flag match. The celebration is short lived, because the Covenant arrive and destroy the academy. What follows is an all-new war: kids fighting against an invisible menace they’ve neither seen or fought before. One that brings heavy doses of helpless and dread… that is, until Master Chief arrives!

And speaking of Spartans, this version of Master Chief (voice of Alex Puccinelli) is very talkative, unlike in the game. As a hero whose actions speak louder than words, he felt a bit out of place (and out of character). I don’t understand why this isn’t the same voice actor as in the Halo video game franchise (an effective Steve Downes)? If the Halo franchise has only two main characters (Master Chief and Cortana) and voice actor Jen Taylor can return for Cortana, why not have the original Spartan supersoldier as well? This really irritated me. 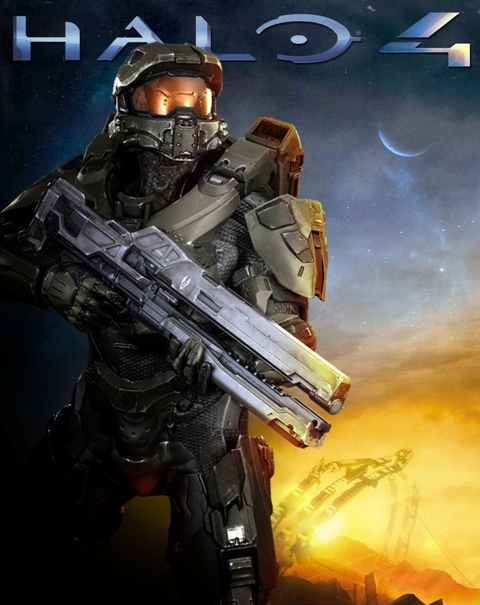 Poster created by RexAdde on deviantART

Initially, Forward Unto Dawn feels like a reality TV show or a documentary. One which practically force-feeds emotion down the viewer’s throat. Lighten up, already. There’s no crying in Halo! Forward Unto Dawn included many call-backs to the various Halo video games, including the Heads-Up Display (HUD), cryo-injections, biofoam medicine, the Warthog and the Red (Roman troops) vs. Blue (Hannibal’s troops) on a battlefield map. Enisha Brewster’s character brought about happy flashbacks of Sgt. Johnson barking orders to Master Chief in previous games. Including Rooster Teeth (PSA: Sleeper) on the DVD bonus menu was logical, though I wish they could’ve somehow been included within the movie as helmeted-character voices. Oh, well. At least the film’s outtakes were included (they were all gems!).

As a true-blue Halo fan, I watched Forward Unto Dawn on my XBOX 360. This movie feels like watching real-life settings of the Halo universe. Including the awesome super-slow-motion action battle scenes and Warthog chase was surely a battle on legendary game mode, surely the highlight of the movie. If there is another promotional movie to be included in the next Halo installment, please stop liberally sprinkling in all the lens flares! Even JJ Abrams thinks there were far too many!

Overall, Forward Unto Dawn works as a $10 million advertisement, but I don’t understand why there isn’t a feature-film adaptation already? This film works, but I would have much preferred to see Director Neil Bolmkamp’s vision of the Halo Universe (previously, he shot a series of Halo short films and was slated to direct a feature-film adaptation for Peter Jackson, before the film’s funding fell apart). With all the dreck being shown in movie theaters, why hasn’t a big-screen Halo been given a fair chance? Maybe after Forward Unto Dawn, that chance will soon become a reality.

Strength: Behind the battle lines with the Master Chief!
Weakness: A bit too emo at the beginning, felt forced and stretched out.
WTF Moment: The Hunter was absolutely GIGANTIC! Talk about HUGE!

Notable Quotes:
– “Call me Master Chief.”
– “Wake me, when you need me.”
– “Apparently, I’m allergic to war.”
– “Controlled bursts. Don’t spray and pray.”
– “For over four years, all I have done, is think.”
– “Never underestimate your opponents. Never underestimate complete sacrifice for victory.”