The Walking Dead: Made to Suffer 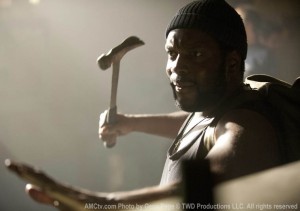 There’s new survivors wandering the woods. Could this be, the fabled introduction of Tyrese? It is! He’s traveling with Sasha and three others (one will soon become undead). The group manages to make their way into a building complex via an extended hole the size of a small nuclear bomb explosion.

Meanwhile, in Woodbury, Andrea is still sleeping with The Governor… and poking through his belongings. The Governor is still insane, thinking he can teach his undead daughter to not be a zombie anymore, with music! And Glenn ripped a dead man’s arm out, just to give Maggie a somewhat sharp bone for protection. This will surely end in bloody violence! I can’t wait.

Ricks Gang awaits the perfect time to rush the fortified and well-lit barricade of Woodbury, while Michonne has a better idea. After breaking into a house, the group decides to split up, but Maggie and Glenn strike first, creating a diversion. And the techno “bad guy” music continues…

The Governor coordinates his enforcers and blatantly sends Andrea away to make housecalls, hoping to keep her from her friends. Speaking of Rick’s Gang, the Shootout in Woodbury is epic. With smoke dampening everyone’s senses, no one truly knows who they’re shooting. Has Andrea switched sides? Seems so. Does Daryl deem Merle worthy of abandoning ship?

Back at The Prison, Carl is gettin’ too big for his britches, venturing out into the dark, all by himself, after he thinks he hears Carol’s screams. Instead, it’s Tyrese and his crew, who somehow made their way into The Prison! Michonne, also alone, finds little Penny before killing her and setting up a predictable battle with The Governor. But instead of the overdue payoff, it will have to wait… most likely until the Season Finale.

Thanks to Michonne, The Governor will now permanently wear an eye-patch. Back to his dastardly ways, The Governor blames Merle on the Woodbury break-in. Almost inciting a riot, he reveals Merle’s captured baby brother, Daryl. Now that’s some family reunion! Both may face an unjust end. But not until the new episodes return on Sunday February 10th! That’s some wait.

I understand the carnage involved during the zombie apocalypse, but I don’t like Oscar’s death, as soon as I started caring about him. First T-Dog dies and Oscar replaced him. Now Oscar dies, and Tyrese replaces him. There should be plenty of room for more than one African-American male to survive during the zombie apocalypse, but that’s just me. Look out, Sasha. Michonne is a main character. You’re probably the next “regular” character to go…