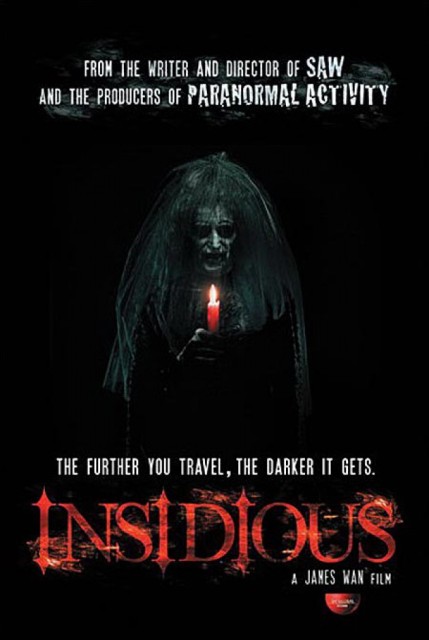 Per Matt
Insidious haunts. But it’s more than just a simple horror movie.

Director James Wan and Australian screenwriter-actor Leigh Whannell really made names for themselves with this movie. Originally released in 2011, I had every intention on seeing this film, but its PG-13 rating led me astray.

I was even encouraged by actor, Dayo Okeniyi in my private interview, who noted watching Insidious while filming The Hunger Games, “That movie haunted us for the rest of the shoot. It’s the most disturbing movie, ever. And we got everyone on set to watch that movie.”

For some reason, I’ve had a terrible experience with PG-13 horror movies. Universally, they tend to let me down. But after noticing the filmmaker’s success with subsequent releases of The Conjuring and Insidious: Chapter 2, I finally made a fresh start.

Insidious opens as a typical horror picture: A young family is terrorized. Expecting a slasher movie, the antagonists are not serial killers, but ghosts and demons. As a paranormal fan (and owner of a haunted house), I was instantly intrigued. The family’s son inexplicably falls into a coma and his family must delve into its history in order to save him.

The end of the movie ventures into astral projection and demonic possession, but wrapping up the movie with fuzzy logic made the entire film a little hazy. The conclusion will surely require multiple viewings to soak it all in.

Realistic special effects and very few CGI shots make the film believable and the spooks are real. The overall use of darkness hides the lack of special effects, keeping the budget down and the audience alert, but weakens the onscreen action.

This is FilmDistrict’s first theatrical release and with the worldwide box office total of $97 million, Insidious was the most profitable film of 2011. Now I’m ready to watch its sequel, Insidious: Chapter 2!

Notable Quotes:
– “It’s not the house that is haunted. It’s your son.”
– “I know someone who can help, if you’re willing to ask.”
– “You may be a superhero, buddy, but you’re not invincible.”
– “This is the first line of a joke, right? A guy comes home to find his wife with a priest.”
– “I can’t have somebody coming into our home and telling us the reason our son is in a coma is because his soul has floated off somewhere in another dimension.”