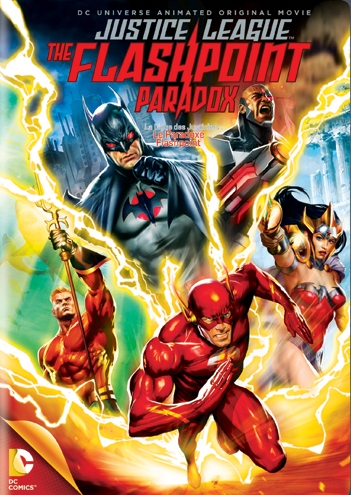 What happens when DC Entertainment creates an adult-oriented alternate-reality timeline full of superhero violence and awesomeness?

The correct answer would be Justice League: The Flashpoint Paradox.

Barry Allen has grown up and still blames himself for a break-in that took his Mother’s life. So, when he gets the chance to pull a Quantum Leap of epic proportions, little does he know the consequences that await him.

Alternate reality fans, take note: This is definitely the anti-origin story for superhero fans more than a little sick of all these reboots found in movie theaters and rental disks. This is the brilliant story of Geoff Johns and Andy Kubert, who crafted the storyline that became a crossover between a few comic book titles at the end of DC Comics’ long-running continuity (and just before The New 52).

Barry awakes to realize he’s no longer The Flash and different versions of superheroes and supervillains fill this alternate reality. As the story unfolds, a simple threat by Professor Zoom proves to be the bind that unravels it all.

Familiar characters are littered throughout this movie, including Batman, Superman, Aquaman, Cyborg and the Rogues (even Clayface and Black Manta make surprise appearances). While they all seem familiar, they all very act differently. Thomas Wayne is a high-roller who runs Wayne Casinos (and becomes a gun-wielding Batman). Cyborg is this universe’s ultimate hero (and also works for the NSA). Superman has been hidden away in a government lab for 30 years. And an ancient battle between Atlantis (led by Aquaman) and New Themyscira’s Amazons (led by Wonder Woman) has practically destroyed the entire planet.

Unless Allen can recreate his initial speedster origins, there might not be anyone to prevent a doomsday device from destroying the worldwide population.

With an estimated budget of $3.5 million, this movie is slick. While I totally dig the movie, I don’t necessarily like the new-style look of the old-school characters. They look like the roided-out baseball players of the ’90s. This is unfortunate and takes away from the suspension of disbelief. However, where the movie succeeds is with its talent.

With the shout of “Shazam!” Captain Thunder appears and it’s a superhero Battle Royal. Almost feels like I’m playing the Injustice: Gods Among Us video game.

During the frantic climax, the animation is intense and incredible. Watching two speedsters battle is like watching equal gamers duel on Tron’s lightcycles.
Because I don’t know all the stories of The Flash, I was immediately intrigued and I really enjoyed finding out these characters’ alternate storylines.

This is no kiddie movie. As an adult-themed movie of a comic book, I totally approve. There’s never enough. And like the Justice League animated series, hopefully there will be potential spin-off movies in the future. Speaking of future DC Entertainment-related products, a Sneak Peek at Justice League: Wars is also provided, which will be the first animated movie based on The New 52. This will be the definitive all-new origin story for the Justice League — with new and “improved” versions of your favorite characters — to be released this winter. Not really looking forward to that one.

Notable Quotes:
– “Forget about them. You can’t change other people.”
– “No matter how fast you run, you can’t save everyone.”
– “Good job, Barry. The world is about to end, thanks to you.”
– “If there is an afterlife, a cushy anchor job would not be out of line.”
– “If I didn’t have the speed-force helping me heal, I’d find another doctor.”
– “The only way to save the world, is to keep this world from ever happening.”
– “Well, Flash. Once again, it looks like you’re the bottom… and I’m the top.”
– “You were the James Bond of Superheroes. What turned you into the Unabomber?”