Redbox Rental: Nazis at the Center of the Earth 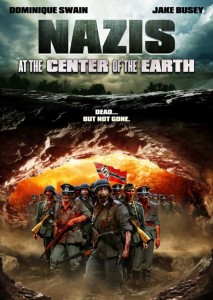 I heard about this movie a while back, through a randomn entertainment webpage. I had read it was decent — not great — and it might soon have a cult following. After reading that, I was somewhat interested, but ultimately forgot all about it. I was reminded of this movie when I heard a similar story told on Coast to Coast AM, so ultimately, I had to rent Nazis in the Center of the Earth.

As the “true” story goes, during the final days of World War II, it is believed that some Nazis escaped in German nuclear-powered submarines. Some of these submarines later crashed, but a few made the trek to Argentina, where they were found, and the Nazis had fled. This is where the story gets sketchy. It is believed that Hitler, along with the Germans, Russians and the British all wanted to claim Antarctica for their own country and set up an impregnable base there. I admit, it may sound a little far fetched, but Argentina is en route to Antarctica from Europe. And more than a few former Nazis were found hiding out there after World War II. Whether any Nazis made it to Antarctica is unimaginable.

Back to the movie, a pair of scientists, doing medical research, are kidnapped by… you guessed it, Nazis. They’re transported to a secret base, where the Nazis are performing abstract skin grafts. After all these years, somehow they’ve stayed alive… but their epidermis decays. Off to rescue them is a class taught by one of the victims’ coworkers, who are all transported to a location from Antarctica to the center of the Earth, of course! As if it wasn’t apparently obvious, the movie veers into far-fetched fantasy. I quickly changed from eager anticipation to pure boredom… until the scientists used stem cells to rejuvenated Adolf Hitler’s head in a jar… affixed to a robotic body! How steampunk of them! Or a Futurama rip-off. Either way, I never thought I’d combine the words “steampunk” and “Hitler” together, but there it is! 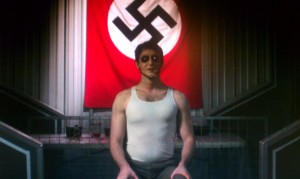 The rest of the movie is fun madness, but it took way too long to get to this point. I spent much of the time reading on an actual case study that links Nazis, Argentina, Antarctica, UFOs, alien technology used by the Germans, not one but two United States Presidents and their agreements with other-worldly visitors, and on and on. 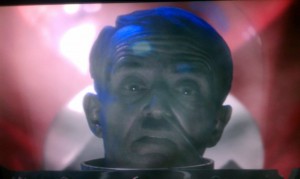 Poor, poor, Jake Busey. How in the world did you get talked into this one? 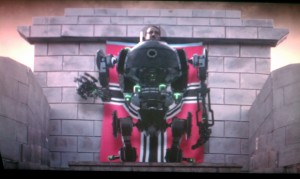 As a fan of alternate history and zombies, I was attracted to this movie. Oddly, it appeals to both. At times the production values look decent — almost believable. Other times, it felt like the budget was already spent, and could not afford any more special effects. I’d highly recommend renting this for a dollar (or less, if you receive free Redbox codes like myself), just to play a drinking game, chugging every time it gets ridiculous. You’d be passed out quickly.

Strength: Zombies, Nazis, Robots and UFOs in Antarctica, OH MY!
Weakness: Too many to count…
WTF Moment: What, exactly, happened before Hitler arose? I wasn’t paying much attention.