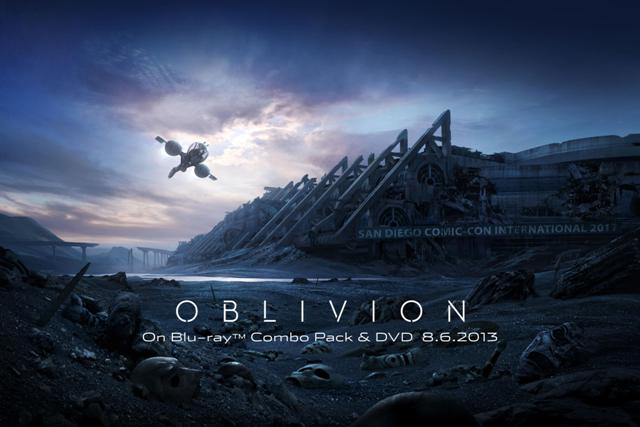 Only a drinking game could make Tom Cruise tolerable…

Oblivion features a war-ravaged Earth and only Cruise can save it. So, cue the eyerolls.

Beginning with five minutes-worth of exposition, the year is 2077 and it’s been it’s been 50 years since The Scavengers have destroyed The Moon. Earth has been thrown into chaos, followed by an alien invasion. Humanity won the war, but lost the planet.

As part of a two-person skeleton crew, Cruise (Jack) is a drone repairman and Andrea Riseborough (Vic) is his communications officer, only two weeks away from joining the rest of Earth’s survivors off planet until a planet-shaking revelation appears.

If this storyline was featuring anybody other than Cruise, this movie would be incredibly appealing to me. Even though they’re good actors, I’m turned off by the politics of Cruise and Morgan Freeman, so playing the Tom Cruise Drinking Game made it more tolerable and fun. It may be coincidental, but practically every Cruise movie features one (or oftentimes) more similar elements. If Cruise should ever appear shirtless, or fall from a great height or laugh in the face of danger, drink up!

The movie is full of great CGI, littered with snazzy futuristic technology. I wasn’t aware Oscar-winning Screenwriter Michael Arndt was involved with the screenplay, which packs a punch. However, the storyline lags a little near the end and owes a lot to past sci-fi movies, including 2001: A Space Odyssey, the original Planet of the Apes and Elysium.

Until the next Tom Cruise Drinking Game, guess it’s time to sleep off all that alcohol…