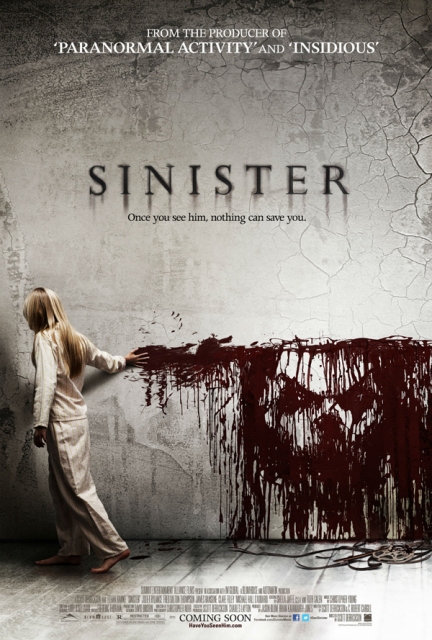 With the Creepy Factor set to maximum, how could I have missed this one at the movie theaters?

Sinister is one of the best horror movies I’ve seen. There’s plenty of mystery and intrigue spread throughout the film, as Ethan Hawke’s true crime writer moves his family into a murder scene. Hoping to crack the case (and write a great book about the entire process, as well), he finds a box of old, mysterious Super 8 snuff films. Immediately, he becomes obsessed with the case. That’s when things start going a bit haywire.

He starts having violent nightmares (which his children share). He hears strange noises throughout the house. Then things really start getting weird.

Inanimate objects are moved and his electronics are turned on throughout the night, with no explanation. He starts to see odd images at night. As he learns more information about the previous murders, Hawke learns of an ancient, pagan Babylonian deity who may be the culprit. Thankfully, the filmmakers don’t try to explain away much of the mystery, keeping the details to a minimum.

Fred Thompson’s minor role as a small-town police officer was geat. I’m hoping he gets more acting opportunities in the future, as he’s always enjoyable on the screen.

The entire movie has a very creepy vibe, keeping me interested and on my toes until the end. Speaking of which, the final reveal is very intense and well worth the wait. Director Scott Derrickson and Composer Christopher Young work exceptionally together. The eerie music and sound effects are incredibly haunting. The pair previously worked together on The Exorcism of Emily Rose. It’s clear they know how to channel emotion into their art.

The movie, a free-fall into darkness, highlights Hawke’s tortured soul. His unrest is understandable, while living in a crime scene is driving him mad. Admittedly, I haven’t seen too many Ethan Hawke movies. But from what I’ve seen, his acting hasn’t been this refined since Training Day, or even Gattaca.

The music, sound effects, direction and fake Super 8 movies are all top-notch, but the great ending is what will haunt you the most. I can’t wait to see what this director-composer pair have in store for their next movie. If it creates just a portion of Sinister‘s raw emotion, it’ll surely project another scary movie.