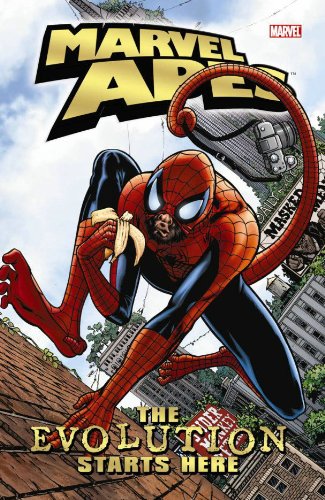 As a direct sequel to the trade paperback, Marvel Apes, the monkey-verse gets introduced to a new menace: the Marvel Zombies!

In Marvel Apes: The Evolution Starts Here, we are reunited with Dr. Fiona Fitzhugh and The Gibbon, after they return to Earth-616. Following the events of Marvel Apes, simian Speedball is sent to Camp Hammond to train to become a hero. But before that can happen, he’s expelled and sent on a mission to find this planet’s newly named superhero: Ape-X (who happened to be his best friend from another dimension).

Supervillan Red Ghost and his Super-Apes take the heroes hostage. Hoping to use Speedball as a dimensional compass, Red Ghost plans to use his super powers to visit monkey-verse and to conquer Earth-8101 as its leader.

At this point, the book takes a dramatic turn, now focusing on Spider-Monkey. Speedball is totally sidelined. Then, all of a sudden, the Marvel Zombies appear, leading to a much-anticipated battle royale that sadly only lasts for six pages. The remainder of the book is totally unfocused, spotlighting minor characters who don’t move the story forward and short-changing the reader of the anticipated Marvel Zombies battle.

Why were so many pages wasted recapping previous storyline, not moving the current one forward? Why was the main storyline buried by the subterfuge? Why wasn’t the main character’s resolved? All the rest were tied up but his was basically forgotten by the writers.

By the time the Marvel Zombies arrive, the fight’s over before it even started. This whole trade paperback was a waste.

The conclusion sets up time-travelling zombie superhero apes, but with this whole premise of distracting the reader until the story’s over without any sort of resolution, I’m not sure I want to read any more Marvel Zombies stories.

Notable Quotes:
– “Flingin’ feces!”
– “Let’s make like a banana and you know what!”
– “For all I care, use super ape-radar to track him down.”
– “This is one small step for monkey –one giant leap for monk-kind.”
– “I might stab you with my pitchfork if you don’t stop talking like Dr. Doom.”
– “Sometimes it is sufficient for the god of mischief to merely be a jerkweed.”
– “It’s the opposite of a cosmic circle of life — it’s an ever-expanding circle of death.”
– “Got to get Donkey Kong out of here before he goes medieval on these mesmerized Marios.”