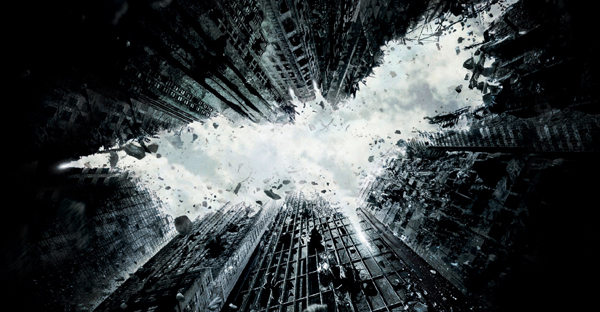 This is the epic conclusion to Christopher Nolan’s vision of Batman. But, is it any good?

I am quite adept to much Batman knowledge. First introduced by Tim Burton, and later by my brother’s highly valued comic book collection, and much later from various animated TV shows, video games and lesser movie sequels… I was schooled by the best. From Bob Kane to Frank Miller, and even Joel Shumacher, I’ve enjoyed a bit of it all from the best of the best, all the way down to Batman & Robin. AK.

This is the end of the Dark Knight trilogy, and Writer-Director Christopher Nolan wanted to leave on his own terms. So, to do that, he pulls a hobbled and brow-beaten Bruce Wayne out of semi-retirement to face a new menace: Bane!

Starting out with a slick air-to-air hijacking was an ingenius way to introduce the mercenary, Bane, who seems to be not only hidden behind a ridiculous Halloween mask, but also behind layers of pent-up emotion (and a disjointed backstory). Bane’s disruption in Gotham City happens in conjunction with Catwoman’s (oddly enough, her name is never used throughout the movie). Batman is pulled in separate directions while simultaneously being hunted down by Gotham’s mayor (the much-hated Nestor Carbonell, who oozes EVIL into all his characters).

Bane attempts to destroy Gotham City with a makeshift nuclear bomb, while the entire Gotham City Police Department is trapped underground and Batman is nowhere to be found. In fact, Batman/Bruce Wayne is only present for about one-third of the movie. The rest of the movie feels unnecessary. Why create a Batman movie… without Batman?

So, Christopher Nolan wanted to go out with a bang? Reveal Batman’s identity to seemingly everybody, even going so far as supposedly killing off Batman. And introduce Robin to the Batman Universe before bowing out? He’s my least favorite character throughout the ENTIRE Batman Universe. I wouldn’t want to direct a Robin character, either. For the next Batman sequel, it seems Robin will attempt to take over the cowl. That is another Batman movie I don’t want to see. Thank you very much, Chrisopher Nolan.

For his final outing, Christian Bale returns to growling as Batman, which I abhor. However, in a few instances, he resorts to whispering, instead. Surprisingly, the whispering is much more effective than the lazy growls Bale screams while in costume. Tom Hardy, as Bane, never removes his mask throughout the entire movie. I’d love to know if Hardy was actually audible, while talking with his mask on, or if his entire dialogue was dubbed. Nestor Carbonell makes a decent living playing bad characters. First, on Lost, and here — as the Mayor without a clue — he takes the cake. It’s obvious Chicago was used as a stand-in for Gotham City during filming of The Dark Knight Rises, but at least remove Wayne’s Illinois license plate on his sports car. Overall, this is an uninteresting, unfun, unbelievable ending to Christopher Nolan’s trilogy. Obviously he was more than a little burned out… and it shows.

Strength: Batman Returns… sort of.
Weakness: Except this is Christopher Nolan’s Batman.
WTF Moment: Why does Bane sound like a bad Sean Connery imitator?