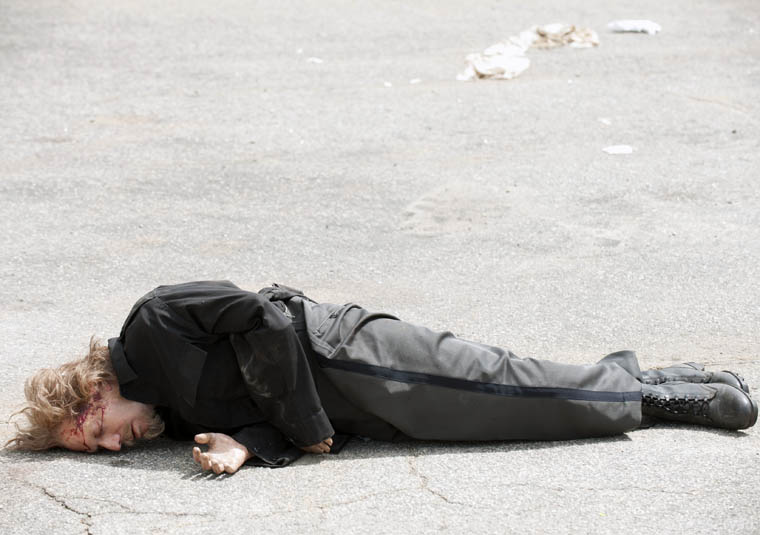 Rick’s sanity equals his looks: disheveled and all mixed up. When Rick envisions his recently departed wife as a silent saint (which she NEVER was, during ANY point of Thw Walking Dead), I have high hopes that Home will be full of DRAMA!

Bear McCreary keeps the score light and touching as Rick embraces Lori’s Ghost, and I am impressed by the sentimental music.

The Governor claims no ill will and no retaliation toward those of The Prison… but actions speak louder than words. Until then, he wants Andrea to be his fill-in as the new Leader of The Prison. But with no more Men of Authority within Woodbury, who shall she sleep with?

Bad Ass Michonne is speaking now, so this is heading in the right direction. I badly want her to be an assett to Rick’s Gang, and not just a mercenary on the fringe of society.

Glenn has grown too big for his britches. While he previously was the soul of the show, I’ve forseen revenge to be his eventual downfall… and that saddens me. Just as Lori has assumed the leadership duties at Woodbury, Glenn has nominated himself Head of the Prison. I’m still betting Glenn will die soon and Tyrese shall become the conscious of Rick’s Gang, but I hope it doesn’t actually happen.

Meanwhile, Daryl and Merle do nothing but bicker. They’re truly competitive; truly brothers, but Daryl questions his decision to abandon Rick’s Gang.

The budding romance between Carol and Axel is nipped in the bud, long before it could even get started, when Axel is shot in the eye by the sniping, one-eyed Governor. RIP Lew Temple, your character was really starting to grow on me, all the while I was expecting something bad to come from you. Now that’s true acting.

With an incredible amount of ease, The Governor (with help from three Woodbury lackeys and a truckful of walkers) break into The Prison for retaliation, and Glenn was nowhere to be found. I can’t tell if The Governor is truly fearless, crazy or simply has no depth perception.

This was an incredibly revealing episode… into (and out of) the wandering mind of Rick, into the Rage of Glenn, and the distrust of brothers.

Strength: An action-packed and revealing episode!
Weakness: The Prison is soon to be evacuated?
WTF Moment: Apparently, the Dixon Brothers were abused as kids, and Daryl continues to blame Merle.