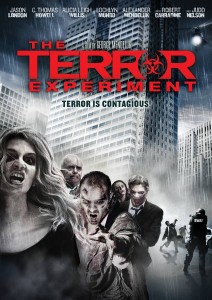 Dirty bomb’s in the air, can you smell it?
Christmastime zombie horde, can you dodge it?
Experiment in fright, escape the skyscraper tonight,
Worker’s Comp check is gonna see a grand.

For some unknown reason, I received a double redbox rental codes, so double up the zombie armageddon, it’s movie night. A so-called freedom fighter ignites a dirty bomb within a highrise around Christmastime. The building shakes, alarms go off, and everyone below the 6th floor doesn’t make it, morphing into some sort of odd creature. Consider this a cheaper version of Quarantine, with zombie-like critters that inexplicably bark (yes, bark). In possibly a new cinematic low in special effects, human beings have their voices dubbed over by actual dogs.

And speaking of classy, Judd Nelson makes a special appearance! So, this is where he’s been hiding, far, far away from Hollywood Blockbusters… in super-low-budget direct-to-video movies!

The story really doesn’t matter, but somehow it revolves around a shady 9/11 conspiracy and coverup campaign by the major media. Lots of handheld camera shaking, smoke machines, dirt-cheap special effects, fast cut-away camera angles and humongous plot holes (wouldn’t you attempt to lock the doors of a skyscraper filled with an airborne agent that creates anger and paranoia to all who inhale it? No? Makes sense!).

And randomly, an injured “zombie” pulls a still-beating heart out of a nearby man, a la Indiana Jones and the Temple of Doom. Seems a little too random. The Teror Experiment was never going to win any awards, but when even IMBD tries to hide this gem, you know you’re dealing with quality. Way to cash that check, Judd Nelson! You picked a winner!

Strength: Found him! This is where Judd Nelson has been hiding!
Weakness: Makeup, special effects and storyline are less than stellar.
WTF Moment: Barking dogs dubbed over human beings. Weird.