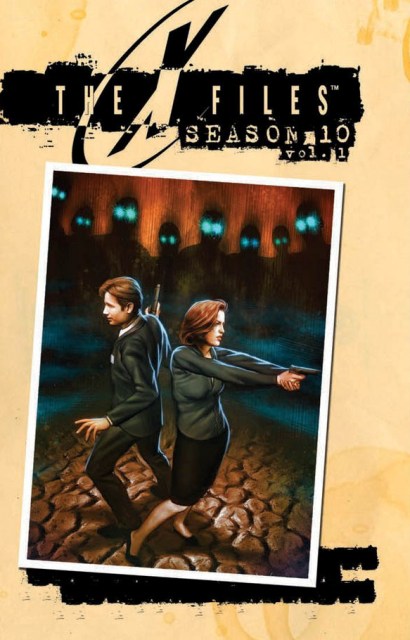 As The X-Files ended its nine-year run on TV with a whimper, I wanted to believe the show would be rebuilt into a series of successful movies. While that’s not necessarily the case, IDW Publishing has taken the reins to the paranormal franchise and updated it with a new series of comic books.

Season 10 continues the mythology of the TV series and directly follows the events of the movie, The X-Files: I Want to Believe. Mulder and Scully are peacefully living anonymously no longer working for the government, until a mysterious FBI network breach is detected. Walter Skinner (now the Deputy Director of the FBI) informs them of the cyber attack, advising them that many of the closed cases of The X-Files (along with anyone associated with them), may have been targeted.

The former agents thank Skinner for his information, but don’t feel threatened until a group of robed psychopaths attack Skinner and kidnap Scully. Later revealed to be members of a crypto-alien cult, The Acolytes, they have grandiose plans for world domination.

Mulder seeks assistance of The Lone Gunmen (who just happen to be alive). Having previously faked their own deaths, they were relocated by the U.S. Government in exchange for securing the government’s technological vulnerabilities. Quite a few other familiar faces make appearances as well, including Special Agents Doggett and Reyes (who are both missing, along with baby William). The Smoking Man may or may not be the evil ringmaster once again, and I expect a few more familiar faces to return front and center with upcoming storylines.

Mulder still has plenty of wisecracks and his character feels familiar, but Scully’s is misrepresented. As a skeptic-turned believer, she seems to easily accept the unbelievable (or is she only making references to past TV seasons). Not only that, but she seems to go out of her way to curse, which she never did on TV or in the movies. I don’t like that at all.

Just as with the original Topps comics stories, the characters feel somewhat similar, but they don’t seem to act or speak just right. By bringing in series creator Chris Carter, IDW hopes to craft a familiar-but-new storyline. Although the characters aren’t spot-on perfect, they’re close. I now have more faith in the IDW series than I did with Topps.

There are lots of red herrings in the five stories of this trade paperback. And just like TV show (and subsequent movies), nothing TRULY is ever resolved. A new mythology is introduced which the comics can build upon.

When I heard that IDW had introduced a second comic series based on the TV show, I knew the company was serious about introducing conspiracy theories, supernatural storylines and real-life urban legends to a new generation. The X-Files: Conspiracy features crossover stories within different IDW titles, including team-ups with The Ghostbusters, Transformers and Teenage Mutant Ninja Turtles! I look forward to picking up a trade paperback full of the entire collection.

The Smoking Man better beware. Mulder and Scully have plenty of assistance to fight the forces of evil and prevent alien colonization, once and for all.

Strength: Many references to past storylines.
Weakness: The characterizations aren’t quite right.
WTF Moment: The former agents adopt the name of a character from Mulder’s favorite childhood movie.

Notable Quotes:
– “You look like you’ve seen a ghost.”
– “Common enemies make for effective allies.”
– “You’ve been out of the game too long, Mulder.”
– “I have come to accept some degree of the unknown.”
– “I find it’s the illegally dead who cause the most trouble.”
– “There are forces out there who seek to alter out society.”