#HauntLife this week takes a look inside the latest edition of the Resident Evil/Biohazard gaming series. Resident Evil 7 was released on January 24, 2017, and took the gaming world by storm. This game is one where even the demo that came out weeks earlier pulls you in and doesn’t let go until the terrifying end.

In Resident Evil 7, players end up taking control of multiple characters, but the most prevalent is Ethan Winters. About three years before the start of the game, Ethan’s wife, Mia, left him to supposedly become a nanny to a family in Louisiana. As the game starts, Ethan receives a video message from Mia, in which she is obviously in distress. She tells Ethan that she loves him, but not to come looking for her before the message ends. Ethan decides to head out on his own to her last known address, the residence of the Baker family.

The environment of Resident Evil 7, while ever changing, holds very strongly on to the creep factor. Even in the early moments of the game, when you are just walking through trails to the house, there is a sense of danger and uneasiness. The houses on the plantation are just plain nasty, exactly what one would expect from a real life haunted house. The floors creak, and every footstep you take (or someone else does, for that matter), have you looking over your shoulder. If the developers were going for the felling of being trapped in a horror film, much like Taxes Chainsaw Massacre, they nailed it perfectly.

The houses in the game, while being extremely creepy, do give you that “lived in” feel. Among the scorpion-covered doors and decay-covered walls, you will find little things that show how life was before the evil spread. Board games are on the table in the family room. Sport’s trophies and high school science medals adorn the shelves in the kid’s room. Clothes hang unworn in the closets. All these things, while small and unnoticed by many, add to the level of something bad happened here, and you are picking up the pieces.

Ethan Winters is not an action star or military agent, like many are used to from the previous Resident Evil/Biohazard games. Ethan is just a regular, healthy guy. This puts him at a great disadvantage in the early stages of the game, as he encounters members of the Baker family — the family of killers that takes the role of the protagonists throughout the game. Very early in the game, you meet Jack, who many have said reminds them of Walter White of the TV series, Breaking Bad. Jack has an evil sense of humor, superhuman strength and nigh invulnerability. He stalks you around the mansion, giving you a real sense of terror. I found myself jumping several times when Jack found me.

The Baker family reminded me very much of the Hewitts from Texas Chainsaw. Jack is the head of the household, and has a foul mouth to equal his nasty temperament. He rules over his wife, Marguerite, and their children, Lucas and Zoe. While Marguerite takes a step back from Jack in anger early on, she later becomes one of the most disgusting and vile creatures I have ever seen in a game. Just seeing her in her final form gave me chills down my spine. Lucas is abused by Jack, but still has the same “redneck psycho” mentality the rest of the family has, with the exception of Zoe, who plays the role of guide in the game, giving Ethan tips through phone calls at key points in the game. The only family member who really doesn’t have much to say is Grandma, who spends most of the game in a seemingly drugged state, slouched in her wheelchair. 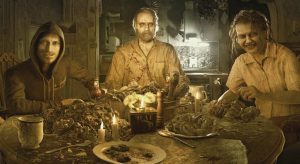 To defend yourself, you are going to have to find some weapons. Resident Evil 7 presents several different weapons, ranging from a pocket knife, up to a grenade launcher. But finding the weapons means nothing without adequate ammo. This is where the game designers put in some difficulties. Ammo is not overly plentiful in the majority of the game. You can create some types of ammo by finding chemical packs, but you have to choose between creating health potions or the ammo, and in many cases the health potions win. And to make matters even worse, some of the creatures you encounter can only be damaged by hitting specific body parts. So, if you have an itchy trigger finger, you might want to hold a melee weapon in hand the majority of the time to save on the ammo.

Gameplay for Resident Evil 7 is completely first person. While many players (like myself) hate playing games in this perspective, Resident Evil was made to play in the virtual reality world. Honestly, I have not had the pleasure of playing the game in VR (since I don’t have an Oculus Rift or a Playstation VR), but I am not sure if my heart could take being immersed in this world. I got enough scares from my first run through to last me a lifetime.

So, after reading this, what do you think a haunt industry professional would give Resident Evil/Biohazard 7? You guessed right. A perfect 5 for 5. The only downside I gave the game was the first person POV, which I really do hate when playing video games, but it helped increase the dread factor. I recommend anyone who has a passion for survival horror games to pick up a copy as soon as possible. It is available on every major gaming platform, as well as through Steam on PC. If you want to get the latest downloadable content when they are released, Sony Playstation will get them first, with the remaining platforms receiving them within a couple of weeks.

Steam players: you can get this game for 20 percent off by purchasing through Green Man Gaming. Here are links

That’s it for this week. Until we meet again, enjoy your #HauntLife.