Rise of the Planet of ZOMBIES!!! 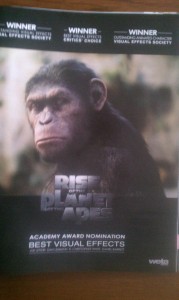 I received a free Redbox movie rental code yesterday, so I put it to good use, finally getting around to seeing Rise of the Planet of the Apes. And I gotta say, as a fan who’s seen EVERY movie in the franchise (every ’70s Roddy McDowell flick, including those that do not feature him and even the Burton misstep), I really enjoyed this reboot.

While it took things a bit to the extreme in terms of canon — and what doesn’t these days, when it comes to sci-fi and fantasy flicks? — Rise was a barrel-ful of fun (despite its re-use of the most popular Charlton Heston line of dialog, which I could’ve done without).

As I watched, I took note on how the chemical ALZ 113 spread from apes to the humans, and its disastrous results. The flick casually glosses over why side effects of the apes are significantly helped by the drug but the humans are killed. Especially hard to swallow, when humans and apes have a very similar chromosome structure, and one would assume the side effects would be similar as well.

However, movie-magic nitpicking aside, I fear the cause of the virus being spread can just as easily be the cause of a virus (or other form of outbreak) leading to Zombies walking the Earth — human error.

Even though Robert Franklin (Tyler Labine) didn’t mean to get injured while attempting to sedate an ape, he still accidentally inhaled some of the virus when his gas mask slipped off. And when he later sneezed on a neighbor, the pandemic had already begun. Following these events, the destruction of the human race is all but inevitable.

The same can be said when we become The Walking Dead.

You won’t be able to stay on high alert for 100% of the day, every day. At some point, you’ll have to let down your guard. You’ll need to close your eyes for rest, and perhaps rely on others for help and safety. And at THAT point, accidents may happen… with catastrophic results.

Rise of the Planet of the Apes is a great movie. Very entertaining and a worthy feature to be included in the epic movie saga. But it may just also be a harbinger of what is yet to come.

And that may or may not lead to the creation of Zombies, but it could just as easily spell out destruction from other means, including viruses, plagues or other infections.

Be alert. Stay on guard. You never know what illness or disasters might be around the corner, all created from human error. This has been a message provided by the United Nations Zombie Task Force.