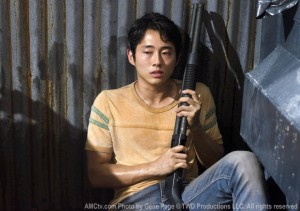 The pulsing club-like beat, as if Lori’s heart, while an contortionist-like zombie squeezed itself into her crashed car was definitely a bonus addition of Bear McCreary. I’ve really taken a notice to his music the past two episodes and I gotta say… I’m a fan.

While it wasn’t pitch black when she wrecked her car, either Lori is slow as a sloth to break out of her car, or the continuity-checking staff member overlooked the timeframe. Regardless, both groups are in trouble.

This was a missed opportunity, Mr. Glen Mazzara. Bringing in Garmin as a premium sponsor (and screen-used product placement) would have been ideal. But perhaps, in this universe, a hands-free GPS device does not exist.
As expected, The Others made an appearance. With no clear-cut villian in the show (other than Merle), having a defined “Bad Guy” is a welcome addition at the O.K. Corral, er, I mean “The Bar.”

Glenn took a bullet for the team. Once Shane starts lying, he just can’t stop. A neglected character is in a coma. And one of The Others loses a leg (and perhaps switches sides?).

All of that, and Lori’s still playing both sides against each other. She truly is evil.

Episode Strength: A lil bit of Zed action. And a nice close-up at the car wreck.
Episode Weakness: Back onto the Baby Daddy Drama bandwagon. Wake me when it’s over.
WTF Moment: Outpatient surgery during the Zombie Apocalypse doesn’t include painkillers… or scalpels. Just pure strength.