Rosencrantz and Guildenstern Are Dead by Nashville Repertory Theatre 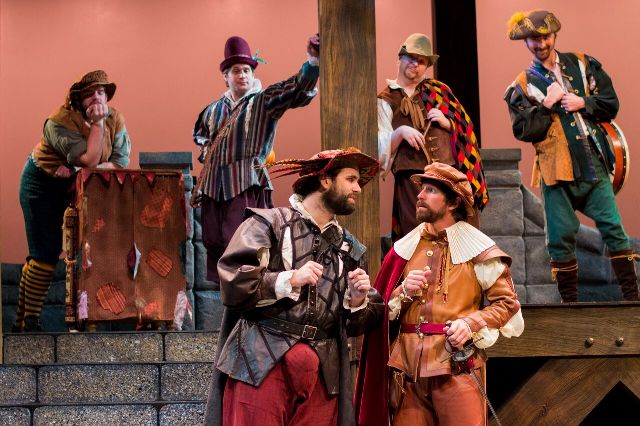 Per Matt
You might recognize the names Rosencrantz and Guildenstern from William Shakespeare’s Hamlet. They were minor characters, hovering just above the background, in that tragedy. No longer supporting characters, the spotlight shines on them in this Tony Award-winning play!

Appearing at the Tennessee Performing Arts Center in the Andrew Johnson Theater from October 10th through the 31st, Rosencrantz and Guildenstern Are Dead is a comedy that focuses on the misadventures of these titular characters. The entire storyline takes place concurrently with Shakespeare’s Hamlet. If you ever wondered what kind of shenanigans these characters were getting into while they weren’t appearing in Hamlet, you can find out in this play.

Rosencrantz (played by Patrick Waller) and Guildenstern (Matt Garner) take center stage as they absent-mindedly question their existence. Whether they’re role playing, enjoying Questions or generally just being absurd… they’re pretty random. Eventually, they realize their true role: King Claudius (Tony Morton) has summoned them to determine Hamlet’s state of mind. You can imagine their difficulty with this task, as well as the tragic effects that may result from their mission.

After watching this play, it’s easy to imagine Bret McKenzie and Jemaine Clement (from Flight of the Conchords) recreating various scenes as Rosencrantz and Guildenstern.

Each of the 13 actors does an admirable job as the cast, but it’s The Player (Jacob York) and his merry men (the Tragedians), who create comedy gold. Those characters were the most enjoyable of the bunch. It seemed like the actors portraying those six characters really enjoyed their roles and it showed.

Rosencrantz and Guildenstern Are Dead offers plenty of quick-wit laughs, but as a story within a story, it really helps to already know the background of Hamlet. While it’s not necessary to reread the entire story, catching up with a wiki beforehand would definitely help to catch all the references that are made throughout the play.

Notable Quotes:
– “We’re actors. We’re the opposite of people.”