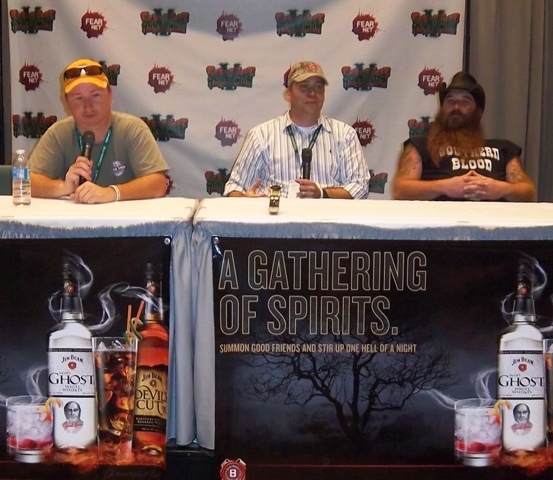 Per Matt
The Southern style of ghost hunting was fully represented at the ScareFest horror and paranormal convention.

What’s your overall thoughts on the first season of Deep South Paranormal?
– Hodges: “It has been one hell of a ride, so far. Being just normal guys, this is all new to us. We had an awesome production company. We had an awesome crew. We could sit here for 30 minutes and give shout-outs to all the awesome people who’ve helped us along the way. Big shout-outs to all the people who’ve been in this business so long, who’ve given us pointers and steering us the right way.”

– Reed: “It’s been a killer ride. All the people we’ve met: Good connections, good friends, we got new family members… we love everybody out there.”

– Ramsey: “It’s definitely been my greatest experience in life, so far. I’ve loved every minute of it.”

With all your ghost-hunting adventures taking you on the road, how many total miles did you travel back and forth?
– Hodges: “Actually, we didn’t. I don’t think we totaled it up, but I think we got onto 42 planes, because there were a lot of legs. There were no direct flights. And we drove to two of the locations. There were usually four plane changes each time and that was for 10 weeks’ worth of filming. Even though a lot of remote places were in the South, you didn’t just go straight there.”

– Reed: “We went to six locations in four states.” 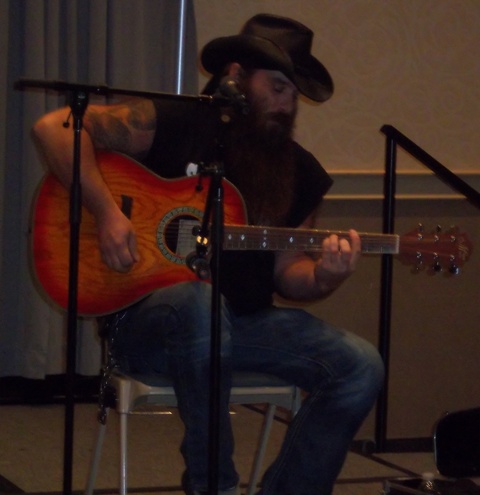 Since the show isn’t currently filming, describe your average day.
– Reed: “We are actually so busy doing conventions, it’s killing us not to be able to do investigations.”

– Hodges: “That’s the downfall of it. We love the investigating time, but we just don’t have time to do it, right now.”

Are you currently performing your music anywhere?
– Ramsey: “As of right now, I’m not doing any performances. I’m trying to get myself into a studio to do some recording and put a new album out.”

Where will the Bama Boys be appearing next?
– Reed: “We’ll go to a small place up in Wartrace, TN. It’s called the Walking Horse Hotel. It’s the first-ever South East Paracon. Keith and I will be there. John’s going out of town with his brother, who’s coming home from Afghanistan. That’s where we’re headed October 5th and 6th.”

– Hodges: “And then we’re doing a lot of local things, like haunted houses. We’re going to set up and network the show, that way and meet fans. Every weekend in October’s going to be very busy.”

Do you have any other appearances scheduled?
– Reed: “We know we’ve got one scheduled for next year, in June. We’re going to Vancouver, Canada.”

– Hodges: “We’ve got a lot of tentative ones. But until we hear about Season Two, we don’t want to make those definite plans and then break them if they say, ‘You guys have to film at this time.’ We’re trying to make plans, but we’re kind of putting them on the backburner until we hear something definite from the show.”

How has your life changed, after filming the show?
– Hodges: “People come up to us at these conventions and say, ‘You’ve got the coolest job.’ This isn’t our job. Every one of us work jobs — even the guys in Louisiana. We work them during the week. That’s what makes our team so strong: We’re normal guys; we do normal stuff. We don’t change for TV. We don’t change for investigations. We’ve got bartenders, landscapers, HR people and electronics people. We’ve got heart. That’s enough said. We appreciate all the support from everybody.”

Down in Pensacola, you witnessed me taking the Garbage Burger Challenge. Your thoughts?
– Reed: “I do not know how you got that down.”

– Hodges: “If I’d have thought about the Garbage Burger this morning, I’d have probably been yakking. It was horrible.”

– Hodges: “Ice cream on a big sandwich? That’s just disgusting. It was fun watching you. That was entertaining.”