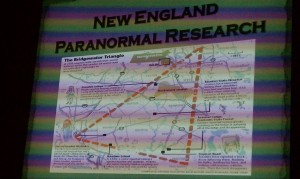 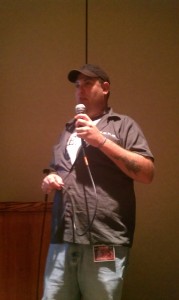 Per My Brother:
Sunday morning, I wandered into this panel, not exactly knowing what to expect. Beforehand, I knew nothing of the Bridgewater Triangle, and after attending this panel, I’m incredibly intrigued. The triangle is huge, covering 200 square miles, located in Southeast Massachusetts, including Abington, Rehoboth and Freetown State Forest. John Brightman made the presentation. He is a member of New England Paranormal Research. The Bridgewater Triangle has extra meaning to him, because his family owns about 40 to 50 acres of land within the Freetown State Park. Paranormal stories surrounding this area have been passed down from generation to generation. In addition, the triangle has included human and animal sacrifice by cult members, and possibly a real-life house that could have inspired the movie, Poltergeist.

Recently, John has been experiencing some paranormal activity, while remodeling his house. In fact while he was digging up some soil in his backyard, two skeletons were unearthed. In his own words:

“Our backyard slopes, and as I was digging it up with a Bobcat, picked up a bucket, dumped it over, and a skeleton rolled out. We ended up calling the police, they came down, they ended up finding one more on the property, and come to find out they were Indians from King Phillip’s War. Through research, we found out on our property, there was actually a military base from the Spanish. So, there’s a long history in this area.”

“The state police came, took the bones to Harvard College, I believe, to be researched. I contacted the Wampanoag Indians, told them what had happened, they wanted the bones back. They contacted the police, but refused, stating it was a crime, even though it was that long ago. We (the landowners) have to determine if they were Indians (which they were) and what to do with them. I’ve not heard anything more from them (police). This was maybe seven years ago. We were not allowed to get the bones back. Since the bones have been removed from my house, it’s kicked up even more activity. I’ve had two mediums, who’ve never been to my house, and told me they were mentally in my house with two dark figures of men with long hair exactly where we found the Indian bones.”

“We’ve had so much activity in the house. My wife has been dragged out of bed by her hair — we have it on video. My step-daughter has had violent, violent dreams since the age of nine or 10. She’d never watched horror movies, and comes up to us and says she’s having a dream about being reincarnated and the same three people are chasing her all the time, trying to kill her. And she tells us how she lived then, how she got burned. There’s definitely something in the house, we’ve never been able to pinpoint if it’s just the Indians or is it something following us home from an investigation? We don’t know.”

At this point, Brightman gives a video presentation that includes an interview and evidence of a retired police officer, who dealt with capturing the Satanic cult members, animal and human sacrifice, and first-hand eyewitness accounts by an escaped kidnap-victim of the cultists.

“I mainly deal with the Bridgewater Triangle in the Freetown State Forest. The triangle is huge. I try to stay away from the swamp area. It’s buggy and nasty. The forest has more of a meaning to me. The cult group formed roughly in 1977. Adjacent to my family’s land, there’s a small logging camp with a shacks. They’d see the loggers clear-cut every piece of cedar around, then they’d move on. But they’d leave the camp set up there. This cult group found a shack, and they used it for rituals and sacrifices. To this day, the shack is still standing. We take people up there, let them investigate it, it is out in the middle of nowhere. Even with help, it took us about a year to find the shack. Paranormal activity-wise, we haven’t gotten too much there. We have gotten screams, cries of help, it’s an active location.”

Within the triangle, Native American ceremonial / paranormal hotspot locations include the Freetown Ledge and Profile Rock. A nearby dirt road, nicknamed Four Mile Woods, also claims to be haunted and is surrounded by recent urban legends. At the exact center of the Bridgewater Triangle lies the Taunton State Hospital, which was built with rocks that was supposedly cursed and reportedly haunted. To this day, the hospital is a mental institution for children and many have reported paranormal activity and dark figures. There’s definitely different aspects to the Bridgewater Triangle — an area with tons of history and paranormal activity.