Per Matt:
Aaron Goodwin was sort of a big deal at ScareFest 2012.

Not only was he in town to promote Ghost Adventures and to give autographs and photographs with fans, but he brought along some friends (actually, independent artists) and they’ve partnered to create Aaron Goodwin Collections and promote their art, Aaron’s clothing line and interpretations of his nightmare-visions and fascination of things on the other side. He’s entertaining. He’s a little erratic. Conversations drift all over, he laughs a lot, he’s having fun, he takes pictures with audience members and even does a little Gangham dance stepping along the way. And the audience likes him just the way he is.

Tell us a little bit about Aaron Goodwin Collections.
– “Basically, what I’ve been doing, for two or three years now, is having you guys (referring to the artists with him, on the panel) paint my visions, thoughts, nightmares. So far, we’ve got a huge collection of stuff. I’m not going to get too detailed on my nightmares… this is part of a ‘Me Thing’ and I don’t want to get too out there yet, but I will talk about it. I’ve got a story, it’s about half-way written. It’s pretty cool.”

How do you come up with locations for lockdowns on Ghost Adventures?
– “Honestly, I never really find out, until it’s time to go. My theory is do not tell me. I don’t find anything out until the interviews before the lockdown. That’s how I do it.”

What lockdown did you absolutely not want to do, at all?
– “In the beginning, most of them. After Winchester Mystery House, I broke down. Something happened, in that moment. When I snapped out of it, that’s when I realized something’s going on here. I’m gonna stop messing with it. (Dark) things seemed to have followed me home. I realized it’s getting worse, so I realized it’s part of my job. Whatever’s happened, let’s just roll with it. My head’s messed up. ‘Come with me, hey, give me a better EVP. I don’t care.’ That’s kind of messed up, but my home is getting 10 times worse. Especially with the paintings. Friends will come over and say, ‘Dude, I just saw a shadow go from that painting to that painting.’ I kind of bring it home, and deal with these guys in the paintings and we’re talking about a video game right now, and we filmed a trailer for a movie that’ll come out… eventually, when it’s all written.”

Is Bobby Mackey’s as crazy as it seems?
– “It is, for me, it was. People go there all the time and nothing happens. It just depends on the person. Some people are looking for it, never get it. When ya least expect it is when it gets ya. We went in there brought things and pissed them off. We brought a murder weapon and pissed it off.”

Why do Zak and Nick use you as bait?
– “In the beginning, I was so scared, fear of being there turns into amped-up energy that ghosts can feed off. But since all this stuff happened to me — since Winchester Mystery House — it’s all changed now. I’ll go in there and taunt, do what I do… it’s scary, everybody’s scared. Don’t get me wrong, two drops of pee do come out, then I take it to the next level, where it’s like ‘Bring it!’ I just want to fight it. In the jail cell, I actually got so scared that I said, ‘Good-bye’ and the camera moved… I thought I was going to get shanked. I was wondering, ‘How do I do this?’ In Hellfire Cave, I thought I was going to have a heart attack with all the shadow people, I was so tense, I thought I’d turned into stone. It’s crazy. But it’s a job. I love it.”

Was there a moment, after joining Ghost Adventures, that you considered leaving?
– “First two seasons! I was like, ‘Dude, no.’ But after all this stuff happens… we go through voo-doo rituals and all this stuff adds up. You become your job.”

Can you tell us a little more about the art from your collection?
– “Well, the nightmares started happening… like a vampire experience. REALLY intense. It just started happening, the same dreams, over and over. About a year ago, it just started fading out. I’ve got the whole story, it’s about what happens when you die. It’s about someone who hunts ghosts, then dies and now he finds the reason why everyone’s still roaming around. I started watching TV shows like True Blood, and I had to stop, because it’s kind of like my dreams. Sometimes at lockdowns, I come up with ideas and tell Christian. I like dark art. I’ve got problems. Ha! Ha!”

What is your advice for young paranormal investigators who want to do it for the rest of their lives?
– “For the rest of your life? It’ll change your life. For me, it took religion straight out the door. I just believe in Mother Nature and wicca now. It’ll change your life, because you’ll have all this stuff happen. But if you’re gonna do it, be prepared for that. But also, be prepared: things can follow you home. You’re dealing with some stuff you can’t see. It might be amped up and followed you around and you’ll wish you hadn’t said some stuff. If you’re strong willed, you’re good. Other that that, keep your guard up. Everyone’s getting attacked… religion or not. Be careful.”

What did you think about Waverly Hills?
– “Waverly Hills is awesome. I don’t know how many people go and test their gear out there… you sit out there for two or three hours, you WILL see shadow people. That place is almost guaranteed. It’s so active. I just think it’s a big party. Everyone’s having fun. I saw a doppelganger there. It was crazy. I also saw a weird shadow creature, crawling on the ceiling, like it was out of the movies… That place is so active, if you really want to find some stuff, then go there. Don’t worry about bringing it out. Just go there, relax and watch. And then you’ll see it happen.” 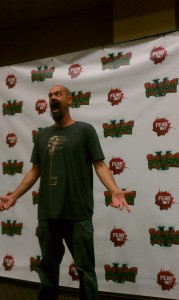 Do you do some type of cleansing, after the hunt, to make sure nothing follows you home?
– “I try to make it follow me. It’s already happened, why not? That’s my theory. I used to try to cleanse, and it got worse. ‘Screw this, I don’t want to be cleansed.’ I like what’s happened. It used to be bad, but since I’ve accepted it, it’s chill. It’s not scary. I get grabbed, I’ve been scratched, punched, all kinds of stuff. But as soon as I realized, ‘You’re obviously here for a reason. And you’re not gonna leave.’ Well, I accepted it. Things will happen. If I cleanse it, I might be in trouble. I’ll go into depression sometimes, over it, just sitting at the house. I’m in a weird spot.”

Why do you do ghost hunts at night? If a place is truly haunted, it’s haunted morning, noon and night.
– “We had, like, four episodes showing us hunting in the daytime. But the problem is, during the day, there’s noise outside. Cars go by. We get tons of activity during the day, but we want it so there’s no disturbance. At night, you’re a little scared. Your eyes see the dark differently. Your eyes will see a certain amount of colors when your pupils open up more, that’s when you see different spectrums of light.”

What’s the top destination to ghost hunt on your Bucket List?
– “It’s a tie. The tombs of the pharaohs in Egypt and Dracula’s Castle. I really want to go to Dracula’s Castle. I almost got there, in Transylvania. One time I landed in Romania, but with all the traffic, it was too long to get there, so we hopped on a plane to Paris and went home. We tried twice, the third time is the charm. One day.”

Have you ever met the Pawn Stars?
– “Oh, yeah. I’ve been over there a couple of times. When friends come in town (Las Vegas), I go over there. One time I saw Chumlee at First Friday.”

What’s your favorite horror movie?
– “Thirteen Ghosts. I know it’s not that great, it’s the only one that scared me, in my whole life. When I go to haunted houses, and they have strobe lights, and they go closer and closer, I have mild panic attacks.”

Did you have any paranormal experiences before you started doing Ghost Adventures?
– “No. I actually never even thought about it. I guess, when I was a kid, my mom said I had imaginary friends, but I never remembered it.”

What do you think will be the beginning of the Zombie Apocalypse?
– “Actually, it’s the bees. Have you heard about the bees and the flys? The flys will bite the bees, and the bees are becoming zombies and they just fly around, never going back home, never go pollenate and they just die. You get rid of bees; we’re done. Bees pollenate Earth. Who’s to say, the bath salt? Chemically imbalanced… drink a soda, and all of a sudden, something happens. I hope Zombies happen. I can’t wait. I’ll count ’em off, one by one.”

Would you be one of the last to survive?
– “I would. Because I’d know to stay put. I’d know that if I waited a month… I think about what I do. If there were Zombies, honestly, I’d be that bad-ass, who’d never shave, with all the guns, at the home base. We’d run the mall, the mall would be ours. No door would be opened, no door would be unlocked!”

When you meet a skeptic who doesn’t believe your experiences, what do you say to them?
– “Honestly, I’m not here to prove (it) to anybody. I’m doing what I need to do. Most of the stuff that happens to me isn’t on the show, it’s at home. I don’t even expose that. I have cameras all over my house but I’m not ever going to show it. It’s my own thing. Thirty percent of the world believes in ghosts, I think that’s the theory right now. If you don’t, don’t. I don’t care. It doesn’t bother me.”