Shadows Removes the Dark Stigma of Being a Vampire 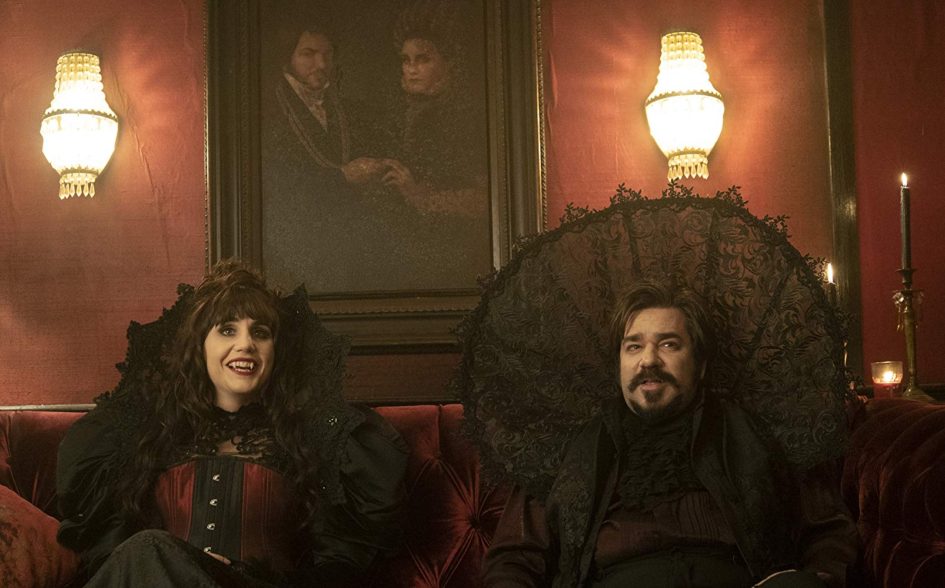 Natasia Demetriou and Matt Berry give a glimpse of What We Do in the Shadows. Photo Courtesy: John P. Johnson © 2019, FX Networks. All Rights Reserved.

After the Twilight era of films concluded, vampires are no longer always viewed as the nightmare creatures previously portrayed in stories for centuries. While not a young adult storyline — thankfully — What We Do in the Shadows takes a different view of the undead, no longer showcasing them as monsters, but as creatures just trying to live their daily lives… er, nightly routines, which just happens to lead to funny and outrageous outcomes.

Based on the five-year-old creature feature of the same name, Shadows is a low-budget chronicling of vampires by a documentary film crew — one that has yet to actually address its purpose — as a fish-out-of-water scenario. The everyday lives of the undead are shown, as these creatures aren’t necessarily vile, foreboding and scary, but they are hungry.

In the pilot, a blood feast is planned when it’s revealed that Baron Afanas has decided to leave the Old Country for a rare visit to conquer the New World. He’s got no idea that has not happened in the few centuries since vampires have arrived in America, as the country is big and these characters lack the killer instinct for the task. Nandor the Relentless is a control freak, Laszlo is wild and untameable, Nadja is having a relationship with Laszlo while secretly searching for her reincarnated boyfriend who’s no longer decapitated and Guillermo is the group’s primary familiar (read: servant), who has been promised to one day become immortal, yearning to become a rare Hispanic vampire.

Anchored by smart camerawork and slick special effects, Mark Mothersbaugh’s score helps create a great old-school vibe. These bloodthirsty creatures of the night are masters of hypnosis (although some have lesser skills in the art), whose hissing whenever they get upset is hilarious. One genius element of the show that was not previously seen in the movie is Colin Robinson’s character (Mark Proksch), which is a dorky “psychic vampire” or “energy vampire,” who either drains the energy of everyone he encounters or enrages them. Every time he appears on screen, Proksch elicits a laugh, much more than his appearances in The Office.

The original film was Jemaine Clement’s and Taika Waititi’s brilliant low-key and low-budget mockumentary of a coven of vampires (or at least a house full of roommates) by a New Zealand film crew, which recently aired on FX. I was originally concerned not much would get accomplished as an adapted 30-minute show, but I wrongly assumed how many laughs and storyline Taika can cram into a short amount of time. I should have known better, as Thor: Ragnarok was filled with his humor and vision and turned around the franchise from dark and dreary into fun and funny. The pilot was written and directed by Taika, and since the filmmaker will no longer be helming the Guardians franchise as previously rumored (Disney Filps on Guardians’ Gunn Decision), this is an excellent opportunity for you to see his great work on display.

The first episode has a hilarious take on LARPing and the preview to the next one seems to follow a similar plot from the movie. Season 1 of Shadows only consists of 10 episodes in 30 minutes of length, which debuted only days ago on the network. This is the perfect show to binge watch, but if you haven’t seen the original source material, catch up on the movie first, then start watching the series. Things will make a little more sense, although unnecessary. Both are great and I can’t wait to see what happens next to these unique characters.