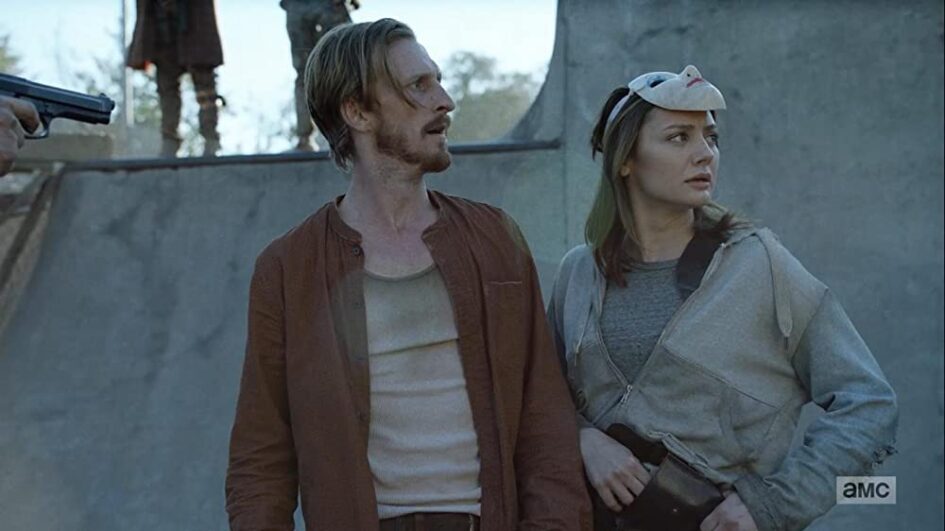 Relationships can be a glorious or a disastrous thing for TV shows. Viewers can tell when popular characters are forced into romantic situations. It’s a thing that can absolutely destroy the chemistry between actors, creating a situation that could lead to the series’ premature conclusion. Or it could bring new life to a flailing show. The latter is what’s occurring in the sixth season of Fear the Walking Dead.

For a few seasons now, John (Garret Dillahunt) and June (Jenna Elfman) have created a solid bond. It’s almost as strong as the one formed by Morgan (Lennie James) and his entire crew. And to a lesser extent, there’s Al (Maggie Grace) and the Helicopter Gal, Dwight (Austin Amelio) and Sherry (Christine Evangelista)… and even Grace (Karen David) and Morgan. This show’s main focus was initially centered around two mixed families. Slowly but surely, almost all of those characters have been killed off, so a new priority was necessary for TWD’s sister series.

With the introduction of John Dorrie, way back in Season 4, there were immediate sparks with June, Naomi or whatever alias the character may have previously used. Naturally, the showrunners needed more drama, so the characters were separated, which felt incredibly forced. Then they were back together last year. This season, June saved Virginia’s life, this year’s Big Bad (played by Colby Minifie), pushing John away again. Notice a trend?

Sherry was kind of the McGuffin for Dwight. While she was a pawn used by Negan in order to keep Dwight loyal in TWD, she didn’t have a whole lot to do on the mothership. And when the character escaped, Dwight slinked away to find her after Sanctuary fell. While she had very little screen time during Negan’s reign, her character was very important for Dwight’s storyline. He felt kind of wasted for a season on Fear, as he was always down in the dumps, trying to find his lost wife. When they finally reunite, they willingly separate two episodes later, as she feels guilty about colluding with Negan, not doing more to stop him — yet she immediately stops helping her husband.

Al briefly spoke to her girl crush on the radio and Grace was finally revealed in the mid-season finale, in full pregnancy mode (presumably with Morgan’s kid). In both situations, the respective protagonists are barely holding onto a glimmer of hope for reuniting.

While the AMC Chief knows the reasons behind the mothership’s ratings decline, Fear now has three crossover characters, colliding in what feels like an even more dangerous season for them all (Fear‘s Collection of Walking Dead Cast-Offs). Morgan was first introduced in TWD’s pilot, returning three years later to the mothership (for five years), now a Bad Ass Lone Ranger in Fear. Dwight was the right-hand man to a monster. He’s been loyal to Morgan’s Crew, but he really hasn’t done anything else. And now that Sherry’s actually back as the latest crossover character from TWD, so what kind of dynamic will she bring to the show?

Will these characters run away to live happily ever after by themselves or will they all finally unite to bring down Big Bad Ginny?

Five months is a very long time to wait for a TV show’s season to return… especially during a global pandemic. Bad weather has piled onto people working from home, unemployment has skyrocketed, power outages and frigid temperatures have snowed in some, while entertainment options have thinned considerably. AMC premiered Fear‘s Season 6 mid October, wrapping its mid-season finale at the end of November. And the second half of the show won’t return until April 11th, which is another two months away. Whatever programming the network previously had in place, surely its execs didn’t believe fans of the show would really return almost half a year later in order to wrap up the season. And will they even remember what previously happened? Other than binge watching previous recordings or catching up on mini-marathon sessions, it really feels like bad planning on the channel’s behalf.

Ginny’s building a future… a bad one for anyone who crosses her, which seems to be quite a few people. If “The End is the Beginning,” the relationships these good guys have may be the only things they can currently hang onto while being separated from their loved ones.

I just hope the audience will finally return to find out what happens to them.

Either way, Fear is still better than the spin-off, World Beyond.