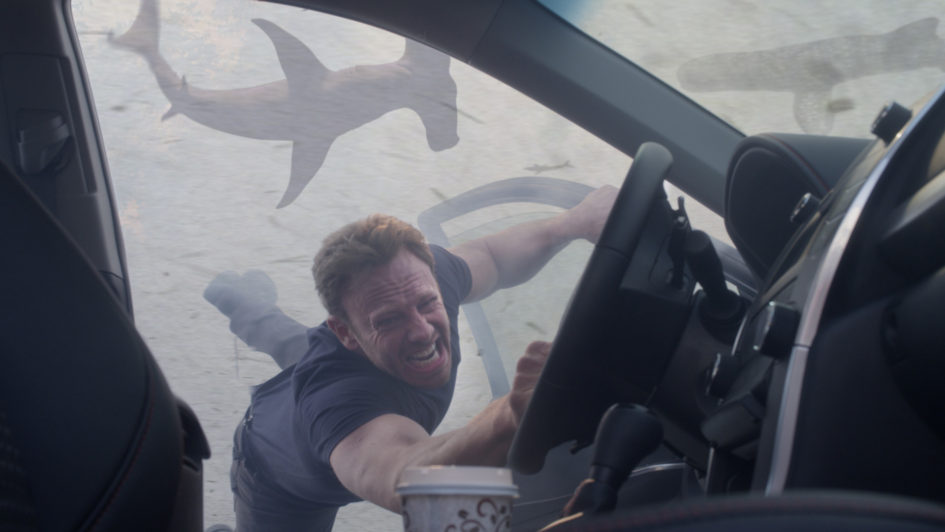 A few weeks back, during a night of bar trivia, one of the questions was: “What item does Fin use to cut his way out of a shark in Sharknado?” Having never seen any movies in the franchise, I guessed a license plate, giving sharks’ penchant for eating trash. It should have been obvious that “chainsaw” was the correct answer. The Syfy franchise’s over-the-top plot cakes on violence and ridiculous scenarios in a way that you might expect an action, horror B-film to showcase if the director smoked crystal meth on the set every day.

Five movies later, Fin, April and Nova are back in the fold. Nova sets the events of Sharknado 5: Global Swarming into action when her Charlie’s Angels-style trio go spelunking in a cave near Stonehenge, while Fin and his family greet the British Prime Minister to meet with NATO allies. The visit is cut short when Nova calls on Fin for his assistance in the cavernous temple. In search of a jewel-encrusted fin-shaped artifact, the two traverse the cave a la Indiana Jones.

The relic, which is said to have the power to destroy all sharknados, is a glowing gem stuck inside of a fin-shaped stone. The parody of Raiders of the Lost Ark in this opening scene includes the discovery of a fedora and whip and, of course, the swapping of the artifact that sets off a booby trap, which of course is a sharknado.

The sharknado soon tears apart London and little Gil (oh, the shark-related name puns) is sucked into the vortex. All this happens after…

So, Gil is now sucked into the sharknado and needs rescuing. Fin and company travel to five different countries to accomplish this. In Switzerland, they chase the sharknado in an epic ski scene along to The Offspring Song, “The Kids Aren’t Alright.” In Australia, Tony Hawk skates over the Sydney Opera House and manipulates the sharknado further. It starts acting as a portal to other places, like Tokyo, where the sharks form a Sharkzilla, chomping through the streets. In Rio de Janeiro, it rips up the Christ the Redeemer statue.

About halfway through the movie, the half-robotic April takes on heavy damage. Nova takes her to the Sharknado Sisterhood, which is a secret society that she attends. After some reconstruction, she is fully charged with power cells and is warned not to get overstimulated. Her drawback to giving up sex is no matter for her, at the time. Getting back her son is the priority.

When the prospect of getting Gil back seems hopeless, the characters get a little deus ex machina in the form of Fabio, as The Pope. “Forgive me father, for I am Fin,” elicits a good laugh from an overall ridiculous scene, in an overall ridiculous movie. Just like the first movie, Fin receives a chainsaw, this time given to him by His Holiness. He knows he must use it to fight the swarm.

The artifact is stolen and Fin has to set aside his son’s rescue to retrieve it. Fin traps the thief in the coliseum and the artifact is soon swallowed by one of the circling sharks. Effortlessly, he vanquishes his foe and with luck, or maybe just that much skill, pinpoints the shark with the artifact and slices it in half to retrieve his desired artifact.

In the end, the team goes to Cairo to use the artifact in one of the pyramids and destroys the sharknados for good. With storms circling them, their plan backfires and April is forced to excite her power cells, wiping out the fish-filled twisters. She is gone and Gil is sucked into an alternate dimension, wandering around the barren, destroyed cities of America. Ultimately, Gil arrives as an old man, telling his father that he was sent back in time, searching for him throughout history. The movie ends parodying Back to the Future as their sci-fi Hummer flies off.

Throughout the movie, there is absurd imagery like sharknados in Africa, with sharks chasing lions, chasing gazelles. There’s also the tongue-in-cheek quotes that muster good chuckles like, “We’re trying to make America great again, but if you follow my lead, we’ll make the world great, again.” Overall, Sharknado 5 revs up the ridiculousness and adds another installment that is, at the very least, entertaining.