Game of Thrones: It’s Time We Had a Talk

All right, let me set two things straight, right off the bat. I am a huge fan of both A Song of Ice and Fire and Game of Thrones. I started reading the books and later devoured them after watching Ned Stark get executed. I am also a big nerd, and one of my tendencies with any particular obsession is to critique it into oblivion. Oh, and also, here is the requisite Spoilers Ahead alert.

While I have enjoyed this season of the TV show, more and more of the nerd in me is finding odd little bits to pick at, but as of the most recent episode, it’s time I brought up the fact that the showrunners David Benioff and D.B. Weiss have been consistently overlooking some of the basic facts of their world. Essentially, the show has an issue with its logistics that is beginning to strain my suspension of disbelief. But let’s start where this whole thing began, in my book.

There is a moment in Season 6 where Yara and Theon Greyjoy, having realized they will lose the Kingsmoot to Euron, decide to steal many of the Ironfleet’s best ships and sail to treat with Daenerys before Euron. This seems to work out for them, as they evidently have enough ships to later ferry not only Dany’s 7.000 to 8,000 Unsullied, but also the Dothraki horde, which according to the show, at least, numbers somewhere near 100,000 Dothraki screamers and their horses. Never mind the fact that this, alone, kind of boggles the mind. We are focusing on Euron Greyjoy at the moment. As he looks out over the Narrow Sea and sees his best ships on the horizon, he responds, “Build me a thousand ships, and I will give you this world.” 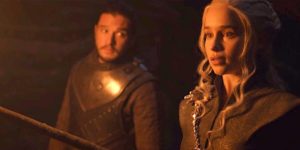 We need to talk about something….

Which, although a well-written line, doesn’t really express how much of an accomplishment this is. Let’s gain some perspective on this number. In the real world, a cursory Google search will tell you that the famous Spanish Armada of medieval Europe numbered around 130 ships. Now, for some examples in Westeros, itself. We know from a little conversation between Cersei and Tyrion in Season 2 that King’s Landing is in dire straits after counting up Stannis Baratheon’s fleet sailing north, just past Tarth, and headed for King’s Landing. His fleet numbers somewhere around 200. This fleet is a sufficient enough threat to worry the Lannisters for an entire season.

We’ve also forgotten another basic fact: Most fleets in the medieval era were not built. They were formed by indenting (contracting) ships for specific jobs. Creating even a small fleet from scratch would be insanely expensive, especially so for a series of islands made up of “rocks and bird shit.” These are no great revelations. It does not take a historian to find these facts. An internet connection and a search engine is all you really need to find this out.

This brings up a much larger issue in the narrative of this season. Euron Crow’s Eye — who inexplicably has no crow’s eye — is maybe being used as a villain’s deus ex machina. We see him everywhere and he seems unbeatable. We see him attacking Yara’s fleet in the dead of night, behind a storm. He shows up and defeats three Sand Snakes and Yara in combat, which by the way, why are the Sand Snakes even in the show? Why kill off Doran and Trystane Martell, the rightful rulers of Dorne, and give all of Dorne to the most disappointing characters in the show? Why would Dorne follow any of them? Dorne may not look down on bastards, but Ellaria is at best the paramour of Oberyn. Am I to believe Dorne is under her power? OK, I’m getting off topic. Let’s get back to Euron. 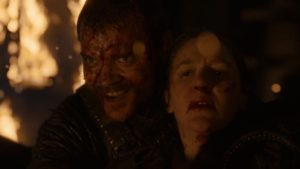 Euron is having such a good time.

So, we once again see his fleet pop up out of nowhere on the other side of Westeros, at Casterly Rock, and set fire to the fleet under Greyworm’s command. In the same episode, we spot him at King’s Landing, parading his spoils of war through the streets. As much as I am deeply enjoying Pilou Asbaek’s performance, I admit Euron is approaching LOTR’s Great Eagles levels of deus ex machina. By the way, if you got that reference, then you’ve come to the right place. But I suppose I can account for all of this by noting, as of episode four, that no one in Westeros knows how to set a perimeter or send out scouts.

Moving away from Euron, how is it that Dany managed to sneak halfway across Westeros with a dragon and a massive foreign army without anyone in the Vale, the Stormlands or King’s Landing spotting her? How is it that the Lannister army, which is highly lauded in the show as the largest, best equipped, best trained and most experienced force on the continent, was surprised on an open plain between Highgarden and King’s Landing? Doesn’t this stretch the imagination, just a little? Must every attack from every army be an ambush and a rout? 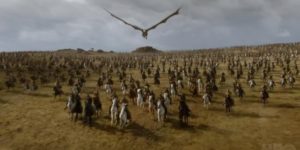 We really should’ve set a perimeter. Didn’t we insult the Freys last season for doing the same thing?

I read over this article and I realize what an ungainly beast it is, and that’s maybe the heart of the problem, here. The show is trying to adapt an unfinished series of books with a current word count of 1,842,762. That’s about 800,000 more words that the entire Harry Potter series. It is a testament to the world Martin has created that the show runners are essentially forced into cutting corners, wiping out entire plot lines, and in general ignoring some basic facts of a realistic, gritty, fantasy series. I can’t really blame them for that. I’ve spent literally years reading the novels, reading the comics, playing the board game, watching the show, and arguing with my fellow nerds over R+L=J, and I can barely hold all of these critiques together in one article.

Maybe this is what has been dragging fans in. Game of Thrones encourages us to take part in all the schemes on our own and with our friends. I am, at times, delighted and at other times infuriated by this show, but I’d be lying if I weren’t looking forward to the next six Sunday nights.

Seriously, though, can we at least stop with the surprise attacks? 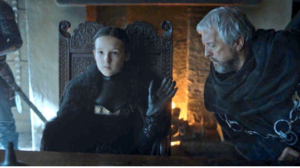