Star Trek: Secrets of the Universe 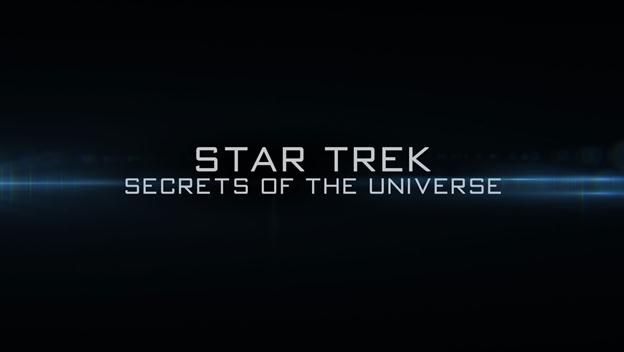 As a promotional tool, Star Trek: Secrets of the Universe will whet the appetites for sci-fi fans to see the latest Star Trek movie. Scientists, professors and writers discuss the latest theories of science to factually prove certain points of science fiction. But at what point does a science lecture become intollerable?

Airing recently on the History Channel, Star Trek: Secrets of the Universe offers brief looks into the just-released JJ Abrams movie, Star Trek Into the Darkness, but the majority of this two-hour special is spent breaking down (and building up) Gene Roddenberry’s Universe. Topics range from the physics of warp drives, space travel at the speed of light, Albert Einstein’s relativity theory, the Hadron Collider and the Voyager satellite.

Educators and scientists speak about the science fact which Star Trek is based, but when an actual astronaut mentions Star Trek being an inspiration for his life, that’s beyond art influencing life.

This was a slightly boring educator’s look into Gene Roddenberry’s Star Trek Universe, with not a whole lot of new information from the last TV tie-in.

As a two-hour promotional tool, for the most part, Paramount Pictures was successful. I’m excited to see the movie, but after hearing this quote by JJ Abrams, I’m almost inclined to totally walk away from his rebooted franchise: “We couldn’t be making this movie for fans of Star Trek; we had to make it for fans of movies.”

Strength: Info-tainment to promote both science and the just-released movie.
Weakness: The science of Star Trek is interesting; then becomes homework.
WTF Moment: A professor’s title contains a typo! (“Astonomy” isn’t a word, History Channel!)

Notable Quotes:
– “How common are other Earths?”
– “The enemy of my enemy is my friend.”
– “We don’t exactly know how long our planet has a future.”
– “Space is a time machine. Looking out into space is looking back in time.”
– “As a kid, I was more inspired by science-fiction, than actual science.”
– “To guarantee our long-term survival, we should try to populate another planet as soon as possible.”
– “You can’t just accelerate to speeds faster than light, because it would take an infinite amount of energy.”
– “Star Trek’s greatest promise is to give us hope that someday, we will be able to travel to other planets.”