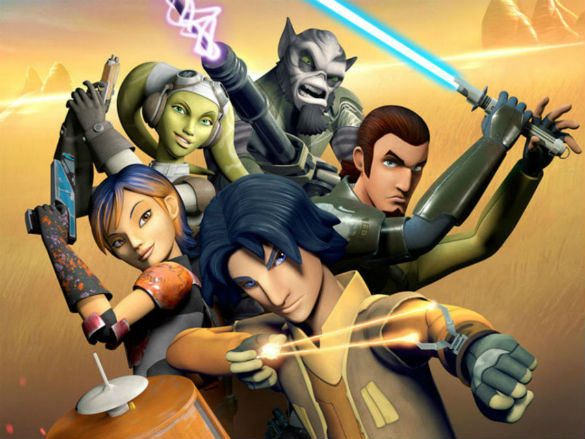 With the first new Lucasfilm TV series to be released since Disney bought out the franchise, will Star Wars Rebels be more like the original trilogy… or the prequels?

Watching the animated TV movie recently — which was nothing more than two episodes edited together — Star Wars Rebels: Spark of Rebellion begins a new era, with the weekly series set to begin on Monday, Oct. 13th.

The show begins by focusing on Ezra Bridger, a reckless and wild 14-year-old who steals to survive. At the end of the movie, he discovers a connection with the Force. Kanan Jarrus portrays the Jedi authority figure, preferring to use his blaster instead of his lightsaber, in order to keep a lower profile. Zeb offers the muscles of the group, while Sabine is a mysterious Mandalorian soldier and Hera is the pilot and mother figure for the crew. The final member of the bunch is Chopper, who is a grumpy astromech droid. Not exactly sure why anyone would intentionally program a robot to have an attitude, but it’s clearly intended to provide the comic relief for the show.

Every yin needs a yang, so that means this series needs some great antagonists. For some reason, the bad guys are always more interesting than the good in classic Star Wars lore, but they never get enough on-screen action. Sadly, Rebels continues this trend. Agent Kallus is a member of the Imperial Security Bureau, who seems to be tasked with hunting down the Rebel Scum who survived the Great Jedi Purge. By the end of the movie, the true evil of the series is revealed: The Inquisitor! Hopefully, he can overcome the bumbling efforts of the many Stormtroopers.

After watching the extended pilot, it’s still way too early to judge the show, but sadly, these Rebels feel like a carbon copies of characters from The Clone Wars. Unfortunately, these episodes do not feel original (or necessary) to help further the Star Wars Universe mythology. It only feels like an excuse to bring back familiar faces (or in this case, voices). Appealing to original fans, there’s Wookies involved in the storyline and by the end of the movie, James Arnold Taylor makes a cameo appearance as Obi-Wan Kenobi, via hologram. In fact, I fully expect Ahsoka Tano to make an appearance before the Season 1 finale, in order to generate fan interest.

There’s new creatures, new alien species and new Imperial soldiers (not to mention new retconning, yet again, of the mythology). While the animation looks light-years better than the first few episodes of The Clone Wars (with the exception of Wookies, who don’t have appealing character models in HD), it definitely feels like a been-there, done-that mentality, not offering anything new. As a really big fan of the original trilogy (not so much the prequels), I fully admit I’m not the target demographic for this series. Needless to say, I really liked the storyline until the kid reveals to have Jedi powers. I was really hoping these characters would only fight the Empire, not return to the ancient religion to give us further adventures of the Padawans.

A couple of the good guys are appealing, but I don’t know how much the overall series will hold my attention. Is this the Disneyfication of Star Wars? It very well could be, and I would hate that, but I’m willing to suffer through a few more episodes until I rush to that judgement. Is it too much to ask for this galaxy far, far away to have an animated series that doesn’t involve an annoying Jedi-in-training teenager?

Strength: More animated Star Wars adventures!
Weakness: There’s nothing truly bold with this new series.
WTF Moment: I don’t remember Stormtroopers ever having unibrows. They need to be immediately removed!

Notable Quotes
– “Blow it out your exhaust vent.”
– “You’re about as bright as a binary droid.”
– “Haven’t you ever seen a rare, hairless Wookie before?”
– “How about a little less attitude and a little more altitude?”