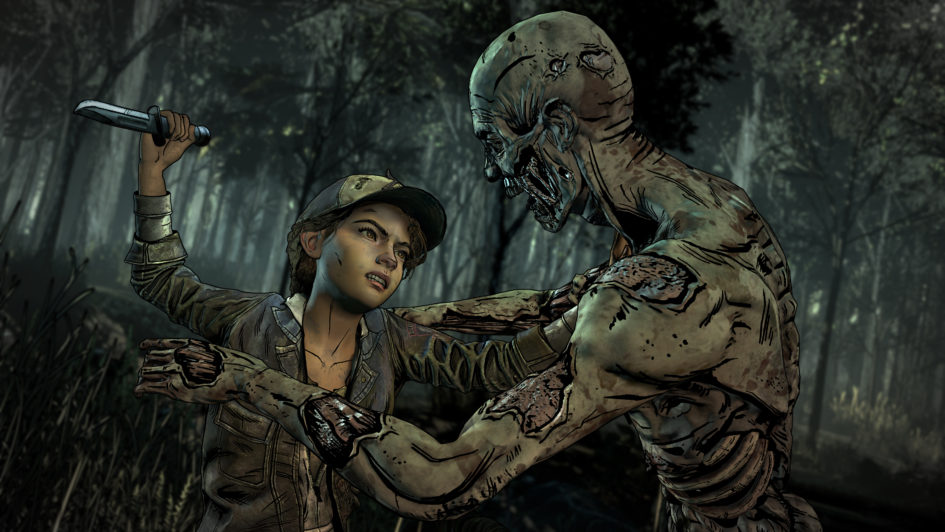 If you could quickly rewrite the events of past, would you actually do it? With Story Builder, you get that opportunity for the upcoming video game, The Walking Dead: The Final Season.

Horror fans and gamers alike can appreciate entering into an already established storyline without having to wade through years of previous material. In just a couple of minutes, Story Builder wraps up all of the major decisions from past seasons involving Clementine within The Walking Dead Universe. From her final moments with Lee Everett, to deciding how to respond to Kenny’s actions and even deciding the fate of little A.J., they can all be tough decisions to make.

These brief recaps of previous seasons build upon the background of Player 1 and their results can be imported to the cloud, to be used when the actual game is started. It’s a browser-based experience that actually feels nostalgic to relive the moments (but the same could be said of replaying the actual previous games). The main difference being there was no actual Telltale Games Account around to link your actions in those first few games. But there is now. And once you choose your previous fate, you will receive a downloadable poster that was created by comic book artist Dan Panosian and animator Daniel Kanemoto, which details your decision making. Selfless. Loyal. Brutal. These are but three of the 32 possible outcomes you may receive.

During past fan conventions, Matt interviewed the actors who voiced the primary characters for the series to get their perspectives. For The Walking Dead: Season One, he spoke to actors Dave Fennoy (Lee Everett, the protagonist) and Gavin Hammon (Kenny, the pseudo antagonist) in a tag-team interview. After The Walking Dead: Season Two was released, he also spoke with Melissa Hutchison (Clementine), whose groundbreaking character is easily the best-written female within both the video game universe, as well as the one shown on the television series.

Beloved by many fans of the games, as well as the TV show, if you attend any comic book, horror, sci-fi or pop-culture convention, you can usually find some great cosplay costumes based on Clementine’s character. And since the games are considered canon, there’s room for crossover characters to wander into and out of the storylines. In Season One, Glenn Rhee and Hershel Greene make brief cameos before moving onto bigger and better things. And naturally, The Walking Dead: Michonne featured the origin story of the katana-wielding warrior. Since this will seemingly be the last season for Clementine’s adventures (and the fifth video game in the franchise, overall), can an upcoming small-screen crossover appearance be in the cards for either TWD or Fear in the near future? Fans sure hope so!

The teaser trailer hypes Player 1 to “prepare for the end,” so does that mean Clementine will finally bite the dust? Or does this mean that it’s simply the final Telltale video game adaptation? There’s only one way to find out. Episode One will be available to download on August 14 via PC, Xbox One and PlayStation 4, while gamers who pre-ordered it will receive the game on June 8th!