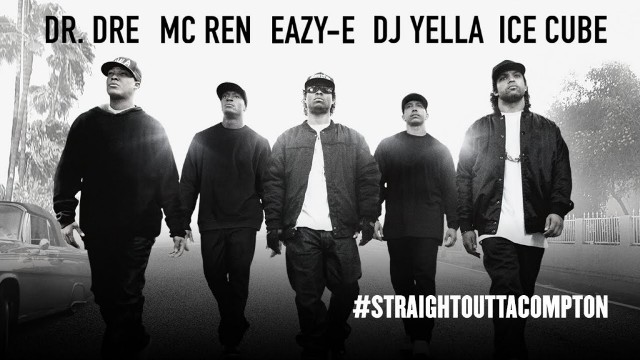 Per Matt
As a child of the ’80s, I grew up with old-school rap. It was unlike anything I had ever heard before. I quickly became a fan of many different artists, but one of the first groups I started listening to was N.W.A. While I may not have looked like anyone from the influential rap group or shared their background stories, I learned a little about each member through their music. Straight Outta Compton attempts to do that as well, depicting a broad origin story for Eazy-E (portrayed by Jason Mitchell), Ice Cube (O’Shea Jackson Jr.), Dr. Dre (Corey Hawkins), and to a lesser extent, DJ Yella (Neil Brown Jr.) and MC Ren (Aldis Hodge).

Director F. Gary Gray’s biopic details the rise and fall of The World’s Most Dangerous Group, who were no strangers to controversy back in the day. Their in-your-face lyrics confronted police brutality, politics and day-to-day survival of living in Compton, California. Through its music, the group helped create the gangsta rap genre and showed no fear getting arrested for something they believed in, often to prove a point.

The majority of the actors onscreen are newcomers and relative unknowns, although as a group, they’re more than capable of telling their story. Eazy-E is depicted as being power hungry and Ice Cube is a sympathetic character. If you think O’Shea Jackson Jr. strikes a stunning resemblance to Cube, himself, there’s good reason: He’s the rapper-actor’s son. There must be good acting genes in this family tree, because Junior’s portrayal of his father is the best of the bunch.

The storyline skips around quite a bit, never quite creating a primary antagonist. At times, that person is group’s shady manager, Jerry Heller, performed by Paul Giamatti. At other times, it’s Eazy-E or Suge Knight. And still others, it’s the media, in general. The story tries to touch on all the important cultural events happening during the group’s existence, but sometimes feels like too many pop-cultural references are crammed into it.

Expect brief appearances in the movie by Warren G, Snoop Dogg, Chuck D and Tupac, just to name a few, but there’s even more making appearances via the end-credits interviews.

While the movie is enjoyable, it glamorizes the characters, never really showing their bad sides. Sadly, that’s to be expected, since Dr. Dre, Ice Cube and Tomica Woods-Wright (Eazy’s surviving widow) are all producers, here. That’s why none of the primary characters are ever shown in a bad light. It’s also the reason why founding members MC Ren and DJ Yella disappear into the background, while the others shine in the spotlight. Trying to tell the tale of five guys throughout 10 years won’t include every story possible, so don’t expect much of Eazy-E’s sickness to be addressed. Dre’s beat-down of Dee Barnes is also noticeably absent.

Be on the lookout: Alexandra Shipp makes a brief appearance, but she’ll a bigger impression as Storm in the upcoming X-Men: Apocalypse.

Actual TV news footage is included in the film, addressing the group and there’s lots of great music, as well. If each song played onscreen is included, the soundtrack will be exceptional. Speaking of music, many of the group’s hit songs are conveniently near completion before they’re performed onscreen. This felt a little cheesy.

With rocky race relations and social unrest recently stirred up in Ferguson, MO, as well as multiple church shootings and other violent current events, Straight Outta Compton feels just as topical today, as it was 29 years, when the group was formed. The movie is as raw as group’s explicit lyrics, which will be enjoyed by old-school and new-school rap fans alike.

Strength: A strong portrayal of rap royalty.
Weakness: Feels like quite a bit of the group’s story isn’t depicted onscreen.
WTF Moment: Aldis Hodge (MC Ren) may look familiar, because he previously appeared as Michonne’s boyfriend in AMC’s The Walking Dead.