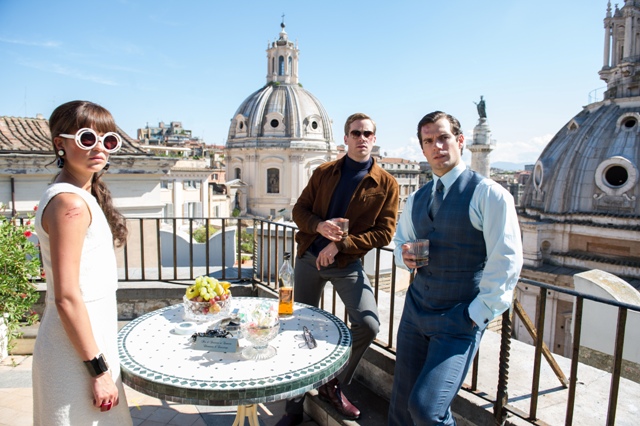 Per Matt
Cold War tensions are reignited and the onscreen retro-cool environment of Guy Ritchie’s latest movie is inescapable.

With The Man from U.N.C.L.E. writer-director Ritchie recreates the early 1960s, when CIA and KGB agents must unwillingly work together in order to prevent a worldwide catastrophe. Napoleon Solo (Henry Cavill) and Illya Kuryakin (Armie Hammer) team up with Gaby Teller (Alicia Vikander), fighting an unknown criminal organization with ties to former Nazis. Elizabeth Debicki shines as the femme fatale, Victoria Vinciguerra, who hopes to create World War III with the assistance of a German scientist.

Giving Quentin Tarantino a run for his money, Guy Ritchie creates a retro environment that’s stylish, fun and features a rocking soundtrack. While the millennials who are the target demographic for this movie won’t recognize much from the the seminal ’60s TV show which this movie is based, the Cold War flavor is alive and fresh, even if sometimes a tad predictable. Expect gray shades of good and bad, with plenty of double crosses thrown in for good measure. And just like his Sherlock Holmes movies, expect witty dialogue, lots of laughs, plenty of action and way too many shaky camera angles.

Fear not, geek squad! The ensemble cast does a great job in the acting department, but I was especially encouraged by Henry Cavill, who’s much more likable as Napoleon Solo than anything remotely seen in his portrayal of Superman in Man of Steel. Here’s to hoping he can build from this performance in order to make Batman v Superman: Dawn of Justice an epic blockbuster!

With this movie, Warner Bros. looks to lay the basis for a franchise or a trilogy, at best. If there are any comparisons made with the espionage of James Bond, it’s to be expected, since Ian Fleming helped create the former TV series. In fact, this entire movie is Guy Richie’s audition to write and direct the next 007 movie. Hopefully, he gets that opportunity.

Democracy and Communism work together for a common goal in this movie, which can be enjoyed by both millennials and Cold War Kids alike.

Strength: Fast-paced, fun movie that’s quite enjoyable.
Weakness: Some of the Cold War references will fly over the audience’s heads.
WTF Moment: I don’t think U.N.C.L.E. is ever defined, although the acronym is mentioned at the very end of the movie.

Notable Quotes:
– “For a special agent, you’re not having a very special day, are you?”