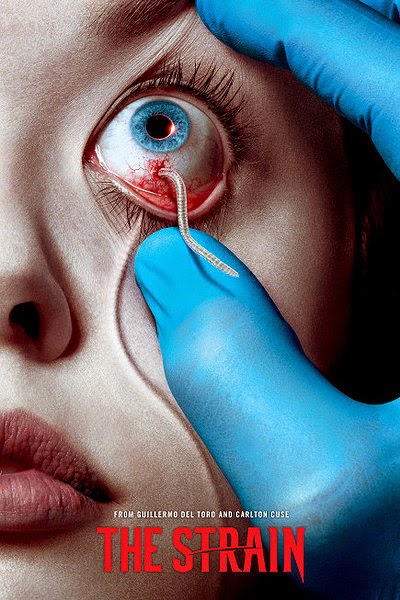 October is the time for terror, so it’s about time to review The Strain!

Based on the trilogy of novels by Guillermo del Toro and Chuck Hogan, the pair (Co-Creators, Executive Producers and Writers) have teamed up with Carlton Cuse and Gary Unga to bring The Strain onto the small screen. That’s a whole lot of talent behind the camera, hoping to bring FX a genre production that competes with the likes of AMC’s The Walking Dead. So, are they succeeding?

Upon landing in New York City, an airplane arriving from Berlin greets JFK Airport with radio silence. After flight attendants notice something moving inside the cargo hold, 206 passengers mysteriously die, but four survive.

The Centers for Disease Control Canary Team is the first support group on the scene and temporarily quarantines the scene until the CDC higher-ups release the victims. Led by Dr. Ephraim Goodweather (Corey Stoll as a former alcoholic, who has control issues) and assisted by Mia Maestro’s Nora Martinez and Sean Astin’s Jim Kent, the group slowly uncovers an unfathomable epidemic, receiving little to no assistance.

When Abraham Setrakian introduces himself to the group (David Bradley playing an elderly, bad-ass pawnbroker who has fought this evil entity before), he teaches them about this evil entity. This version of vampires comes from parasitic blood worms, seeking hosts. Rewriting history, the ranks of the Nazis were actually infected by vampires. Somehow, the creature’s leader — affectionately known as The Master — was temporarily restrained by Abraham. Mysteriously arriving from Germany, the creatures quickly spread throughout the Big Apple, creating a epidemic.

Infected symptoms include pale skin, fear of sunlight, and hair loss (though that’s not all that’s falling off these victims).

Forget stakes through the heart: These vampire hunters survive by decapitating their prey and by firing silver-plated projectiles out of a modified nail gun. It’s definitely an updated version of an ages-old classic!

In addition to the humans-vs-vampires storyline, the cryptic but powerful Stoneheart Group works its way into the series mythology. Led by the billionaire Eldrich Palmer, he may soon get his wish for immortality. I really enjoy following his storyline.

With various disinformation campaigns incorporating a military conspiracy and a seemingly alien autopsy, at times The Strain feels like an updated version of The X-Files (coming from an X-Phile, that’s a good thing). Whatever you do, don’t make the same mistake I did: Never eat a meal while watching this show!

Expect lots of subtitles throughout this series, including Spanish and German languages being spoken and the occasional on-screen text message to pop up. There’s some very cool lighting, technology and special effects used to full effect throughout the series.

Noteworthy characters include Jim Kent, who is a complicated (and corrupt) CDC assistant and Bolivar, the blood-sucking goth-rock star who would seem outrageous if the stereotype hadn’t already happened in real life.

Having recently just watched the first five episodes, I must admit I was pleasantly surprised. While it’s difficult to get into the Halloween spirit when a monster series debuts in July, somehow The Strain creeped beneath my skin. I’ll be looking forward to a Season 1 marathon, so I can catch all the missed episodes. A minor complaint involves the antagonist. There are very few vampires appearing in the first few episodes, but the story moves along accordingly. I expect more to appear in subsequent episodes.

When i envision the inevitable Zombie Apocalypse or the spread of the Ebola virus in America, or, in this case, vampires, I believe the show’s depiction of a government fearing red-tape litigation could instantly spread the disease.

Not being one to frequently adopt new TV series, I may be hooked. As an added bonus, the series has already been renewed for a second season, with 13 new episodes to appear during the summer of 2015.

Strength: A procedural vampire concept? It works!
Weakness: Needs more backstory to The Master and more onscreen vampires!
WTF Moment: I don’t like the onscreen implied vampire-on-dog violence, but who does?

Notable Quotes:
– “This is not for everyone.”
– “Inaction is the greatest evil.”
– “We got ourselves a dead airplane.”
– “Even I miss breathing… sometimes.”
– “You believe everything you see on TV?”
– “That was a body controlled by a virus.”
– “It actually hurts to keep my eyes open.”
– “This scourge has existed for a millennia.”
– “Good things happen to good people, right?”
– “A monster just tried to murder us. There are no records.”
– “Until you are willing to do what needs to be done, you are of no use to me.”
– “Everyone’s priority is covering their asses no one gives a shit about the truth.”
– “Hunger is the most important thing we know. But hunger can easily be quieted down.”