How to Survive a Sharknado 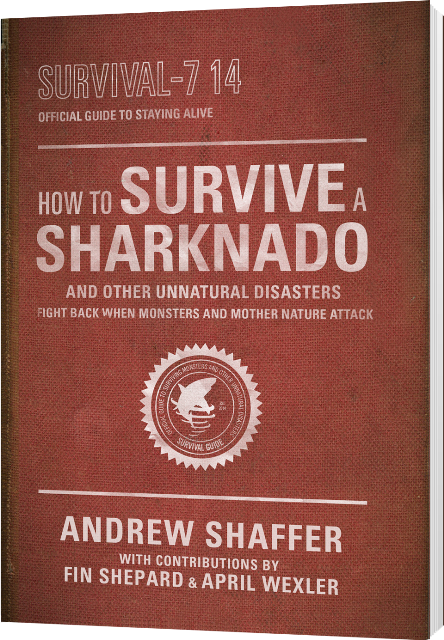 Per Matt
“No matter what we do, it’s too late to stop unnatural disasters. All we can do is survive them.”

Just in time for Shark Week, I received my copy of How to Survive a Sharknado. Not a moment too soon, I might add.

Having recently watched the double-header of Sharknado and Sharknado 2: The Second One on Syfy, I knew what I was getting myself into. Mother Nature can create a variety of catastrophes and by reading this handbook, you too will learn how to survive an unlimited number of unnatural disasters.

In addition to being a Syfy Channel promotional tool linking many of the original movies together, the book offers an interesting what-if scenario of the horror world. What if mad scientists turn every-day creatures into bio-weapons? What if science is the cause of a new species of violent, killing animals? And what happens when newly discovered deep-sea creatures are uncovered and they bite the hand that feeds them? The imaginative scenarios are endless, but generally end with death and destruction.

Three goals of this book include studying documented incidents, getting out of harm’s way and surviving deadly events by using the listed tips. The first part of book concerns fighting mother nature. Many apocalyptic events happen naturally. But what happens when man elevates the danger factor? Earthquakes, climate change and even drilling for oil can all awaken many sorts of unusual and unnatural activity.

How to Survive a Sharknado shines with its depictions of monsters (many of which are created by man). Resulting mutations of radioactive waste, genetic engineering, cloning techniques and conspiracy theories concerning government cover-ups all lead to bad news for the human race. Quite a few paranormal myths are addressed (including the real-world documented cases concerning the Mothman) and some scenarios are even quite believable, including a possible cause for colony collapse disorder of America’s bee population.

The underlying moral of this story is don’t mess with Mother Nature. Eventually, she will get her revenge! Should scientists use nanotechnology to create and corrupt a living animal, it’ll eventually lead to the Apocalypse. Should someone feed experimental steroids to a wild animal’s diet, it could end the entire human race overnight.

Surprisingly included in the book is a great real-world survival guide for riding out disasters, which includes tips for laying out escape routes, preparing bug-out kits and using fallout shelters. All of that will be needed as a last resort, of course, for when the mutant monsters attack!

Notable Quotes:
– “You can’t avoid the future. You can only survive it.”
– “The key to surviving a sharknado is being prepared for a sharknado.”
– “Most of the Earth’s population lives in coastal regions prone to dinonamis.”
– “Unless you receive treatment within two hours, you will turn into a Zombie.”